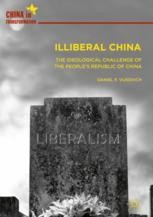 The Ideological Challenge of the People's Republic of China

This book analyzes the 'intellectual political culture' of post-Tiananmen China in comparison to and in conflict with liberalism inside and outside the P.R.C. How do mainland politics and discourses challenge ‘our’ own, chiefly liberal and anti-‘statist’ political frameworks? To what extent is China paradoxically intertwined with a liberal economism?  How can one understand its general refusal of liberalism, as well as its frequent, direct responses to electoral democracy, universalism, Western media, and other normative forces? Vukovich argues that the Party-state poses a challenge to our understandings of politics, globalization, and even progress. To be illiberal is not necessarily to be reactionary and vulgar but, more interestingly, to be anti-liberal and to seek alternatives to a degraded liberalism. In this way Chinese politics illuminate the global conjuncture, and may have lessons in otherwise bleak times.

Daniel F. Vukovich is Associate Professor in the School of Humanities at Hong Kong University. Author of the acclaimed China and Orientalism (2012), his research masterfully integrates a variety of disciplines and insights from Western and Chinese academia.

“The strengths of the book lie in its coverage of a wide range of discourses, interdisciplinary outlook, and the contextualization of Chinese illiberalism. Its critique of deep-seated liberal presumptions of mainstream China studies also deserves further debate.” (Shih-Diing Liu, China Information, Vol. 34 (1), 2020)
“Vukovich’s book is an intellectually-challenging and therefore interesting read. The book makes an important contribution that puts the Chinese state in a broader theoretical context of (neo-) liberalism and its apparent decline. Scholars interested in critical theory as well as those observing the Chinese political system and especially those willing to challenge the Western narrative of China are strongly recommended to study this work.” (Felix Wiebrecht, Democratization, Vol. 2016 (2), 2019)
“Illiberal China, from its punning title forwards, reveals how China is the objectified "other" of the West, but is also an actually existing subject with its own intrinsic logic full of paradoxes and tensions. It examines the political-economic and cultural narratives surrounding the different representations of "China," as well as their logical boundaries and interrelationships. The book intertwines external and internal, global and domestic perspectives. At the same time, Vukovich tries to reflects critically on Western liberalism by presenting "China as a problem." Vukovich deals frankly with many complex and sensitive topics, although this style is not an end in itself but serves to open up a new discursive space. He believes "China" challenges previous theoretical and historical narratives, especially those attached to political theory and concepts such as liberalism or democracy. This is a powerful, subtle book that challenges Chinese research from a different paradigm and theoretical system. It deserves serious attention indeed.” (Lu Xinyu, East China Normal University, China)

“Understanding today’s China is an intellectual and moral challenge. Vukovich takes it head on and makes a paradoxical case that “illiberal China” may be the best hope in this bleak moment in history. China may or may not deliver on the hope, but I am sure everyone will benefit from reading this well informed and thought provoking study on the contemporary Chinese ideological struggle in its global context.” (Zhiyuan Cui, Tsinghua University, China)

“Liberal values and practices are supposed to be universal and China seemed to be going in the "right" direction. Until recently, that is. It now seems clear that the Chinese political system will evolve based on its own "illiberal" foundations. Vukovich's original book argues that what he terms "progressive illiberalism" not only fits China's political context, it is also defensible from a normative point of view. Whatever we think of his controversial argument, it will generate much needed discussion.” (Daniel A. Bell, Shandong University and Tsinghua University, China)