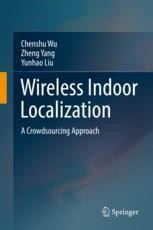 This book provides a comprehensive and in-depth understanding of wireless indoor localization for ubiquitous applications. The past decade has witnessed a flourishing of WiFi-based indoor localization, which has become one of the most popular localization solutions and has attracted considerable attention from both the academic and industrial communities.

Specifically focusing on WiFi fingerprint based localization via crowdsourcing, the book follows a top-down approach and explores the three most important aspects of wireless indoor localization: deployment, maintenance, and service accuracy. After extensively reviewing the state-of-the-art literature, it highlights the latest advances in crowdsourcing-enabled WiFi localization. It elaborated the ideas, methods and systems for implementing the crowdsourcing approach for fingerprint-based localization. By tackling the problems such as: deployment costs of fingerprint database construction, maintenance overhead of fingerprint database updating, floor plan generation, and location errors, the book offers a valuable reference guide for technicians and practitioners in the field of location-based services. As the first of its kind, introducing readers to WiFi-based localization from a crowdsourcing perspective, it will greatly benefit and appeal to scientists and researchers in mobile and ubiquitous computing and related areas.

Chenshu Wu is a post-doctoral research associate in the Department of Electrical and Computer Engineering, University of Maryland, College Park. He received his Ph.D in 2015 in the Department of Computer Science and Technology, Tsinghua University. He visited The Hong Kong Polytechnic University and the University of Michigan, Ann Arbor in 2013 and 2014, respectively. He received his B.E. in 2010 in Computer Science from School of Software, Tsinghua University. His research interests include Internet of Things, mobile computing and wireless sensing, etc. He has published over 40 papers in competitive conferences and journals. He served as TPC members for premier conferences including IEEE INFOCOM, IEEE ICDCS, etc.

Yunhao Liu, a Fellow of ACM and IEEE, is MSU Foundation Professor of Michigan State University, and Chang Jiang Professor of Tsinghua University. He received the Ph.D. degree and M.S. degree in Computer Science and Engineering from Michigan State University in 2003 and 2004, respectively, and a B.S. degree in the Automation Department of Tsinghua University in 1995. His research interests include distributed systems, cyber physical systems, and Internet of Things (IoT), etc. He has published over 200 papers on prestigious conferences and journals, as well as 3 books entitled ‘Introduction to IoT’ , ‘Internet of Everything for New Industrial Revolution’ and ‘Location, Localization, and Localizability’. He is now serving as the Editor-in-Chief for ACM Transactions on Sensor Networks.