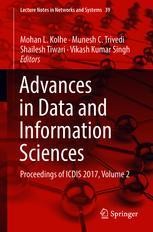 Advances in Data and Information Sciences

The book gathers a collection of high-quality peer-reviewed research papers presented at the International Conference on Data and Information Systems (ICDIS 2017), held at Indira Gandhi National Tribal University, India from November 3 to 4, 2017. The book covers all aspects of computational sciences and information security. In chapters written by leading researchers, developers and practitioner from academia and industry, it highlights the latest developments and technical solutions, helping readers from the computer industry capitalize on key advances in next-generation computer and communication technology.

Prof. (Dr.) Munesh C. Trivedi currently works as a professor at the Computer Science and Engineering Department, ABES Engineering College, Ghaziabad, India. He has published 20 textbooks and 80 research papers in various leading international journals and conference proceedings. He has received Young Scientist and numerous other awards from national and international forums. He has organized several international conferences sponsored by IEEE, ACM and Springer. He is on the review panel of the IEEE Computer Society, the International Journal of Network Security, Pattern Recognition Letters and Computer & Education. He is Executive Committee Member of IEEE UP Section, IEEE India Council, and also IEEE Asia Pacific Region 10.

Prof. (Dr.) Shailesh Tiwari currently works as a Professor in Computer Science and Engineering Department, ABES Engineering College, Ghaziabad, India. He is an alumnus of Motilal Nehru National Institute of Technology Allahabad, India. His primary areas of research are software testing, implementation of optimization algorithms, and machine learning techniques in various problems. He has published more than 50 publications in international journals and in proceedings of international conferences of repute. He is editing Scopus, SCI and E-SCI-indexed journals. He has organized several international conferences under the banner of IEEE and Springer. He is a senior member of the IEEE, Member of the IEEE Computer Society, Fellow of Institution of Engineers (FIE).

Dr. Vikash Kumar Singh is with Indira Gandhi National Tribal University, Amarkantak, MP, India, as Associate Professor in Computer Science with focus on artiﬁcial intelligence in the Faculty of Computronics. He has also received UGC-NET/JRF. He has more than 17 years of academic experience. He has completed MCA along with Ph.D. His academic and research work includes more than 250 research papers, and he has attended more than 15 national and international conferences, workshops, and seminars. He has been invited by many national/international organizations for delivering expert lectures/courses/keynote addresses/workshops.