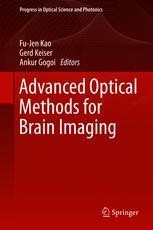 This book highlights the rapidly developing field of advanced optical methods for structural and functional brain imaging. As is known, the brain is the most poorly understood organ of a living body. It is indeed the most complex structure in the known universe and, thus, mapping of the brain has become one of the most exciting frontlines of contemporary research. Starting from the fundamentals of the brain, neurons and synapses, this book presents a streamlined and focused coverage of the core principles, theoretical and experimental approaches, and state-of-the-art applications of most of the currently used imaging methods in brain research. It presents contributions from international leaders on different photonics-based brain imaging modalities and techniques. Included are comprehensive descriptions of many of the technology driven spectacular advances made over the past few years that have allowed novel insights of the structural and functional details of neurons.

The book is targeted at researchers, engineers and scientists who are working in the field of brain imaging, neuroscience and connectomics. Although this book is not intended to serve as a textbook, it will appeal to undergraduate students engaged in the specialization of brain imaging.

Fu-Jen Kao is a Professor at Institute of Biophotonics, National Yang-Ming University, Taiwan. At present, he is the Vice President of the Association of Asia Pacific Physical Societies. He was also the former Director, Institute of Biophotonics, National Yang-Ming University and former President of the Physics Society of ROC, Taiwan. In addition, he has served as the Chief of Research and Planning, Office of Research Affair, Professor of Institute of Electro-Optical Engineering and Professor of the Department of Physics at National Sun Yat-sen University. He is a fellow of Royal Microscopy Society and SPIE, associate editor of IEEE TBME and reviewer of a number of international research journals. The research laboratory led by him has successfully developed many advanced techniques based on multiphoton microscopy with a wide variety of imaging modalities, including two-photon, OBIC, SHG, THG, CARS, stimulated emission, FLIM/FRET, etc. In addition to championing these developments, he has transferred many of the above techniques to a large number of interested research groups both domestically and internationally. He has authored over 90 SCI Journal Papers, edited two books, and presented his research at over 100 international conferences. He received his Bachelor of Science (BA) in Physics from the National Taiwan University (June, 1983), Master of Science (MA) in Physics from Cornell University (August, 1988) and Doctor of Philosophy (PhD) in Physics from Cornell University (August, 1993).

Gerd Keiser is Research Professor at Boston University and Professor and consultant at PhotonicsComm Solutions, a firm specializing in education and consulting for the optical communications and biophotonics industries. Previously he was involved with telecom technologies at Honeywell, GTE, and General Dynamics. His technical achievements at GTE earned him the prestigious Leslie Warner Award. In addition, he has served as Adjunct Professor of Electrical Engineering at Northeastern University, Boston University, and Tufts University, and was an industrial advisor to the Wentworth Institute of Technology. Formerly he was a chair professor in the Electronics Engineering Department at the National Taiwan University of Science and Technology. He also was a visiting researcher at the Agency for Science, Technology, and Research (A*STAR) in Singapore and at the University of Melbourne, Australia. He is a life fellow of the IEEE, a fellow of OSA and SPIE, an associate editor and reviewer of several technical journals, and the author of five books. He received his B.A. and M.S. degrees in Mathematics and Physics from the University of Wisconsin and a Ph.D. in Physics from Northeastern University. His professional experience and research interests are in the general areas of optical networking and biophotonics.

Ankur Gogoi is an Assistant Professor in the Department of Physics at Jagannath Barooah College, Assam, India and a post doctoral Research Associate at the Institute of Biophotonics, National Yang Ming University, Taiwan. Formerly, he also served as an Assistant  Professor in Physics in The Assam Kaziranga University, Assam, India and Girijananda Chowdhury Institute of Management and Technology – Tezpur, Assam, India. He is a reviewer of several international journals, author of more than a dozen international research publications, editor of one book and member of SPIE, OSA and the Optical Society of India (OSI). During the last 10 years he has been actively involved in optoelectronics, photonics and nanotechnology research, especially in the design and fabrication of laser based light scattering instruments for the characterization of small particulate matter. He completed B.Sc. in Physics from Dibrugarh University, India in 2004 and received M.Sc. and Ph.D. from Tezpur University, India in 2006 and 2012, respectively.