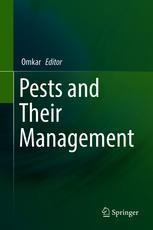 Pests and Their Management

This book comprehensively compiles information on some of the major pests that afflict agricultural, horticultural and medicinal crops in particular as well as many polyphagous pests.  Not only does this book deal with the pests of common globally produced crops it also addresses those of rarely dealt with crops such as  seed spices, medicinal and aromatic plants. While the perspective of insect pests is largely Indian and South East Asian in context, the book does deal with globally problematic pests, particularly polyphagous ones. Not only will the readers be acquainted with the pests, their damaging potential and their life cycle but also with the latest methods of managements including ecofriendly measures being employed to keep pest populations at manageable levels.

The 27 chapters in the book, are grouped into four sections primarily based on crop types, viz. pest of agricultural, horticultural and medicinal crops, and polyphagous pests, making the book easy to navigate. Each of the chapters is comprehensive and well illustrated and written by academicians who have dedicated their entire lives to the study of a particular crop-pest complex. The final chapter of this book provides an overview on the principles and processes of pest management.

Professor Omkar has been actively engaged for over three decades in teaching and for nearly four decades in research. He is currently working as professor and head at the Department of Zoology, University of Lucknow, Lucknow, India. He is a fellow of the National Academy of Sciences, India, and seven more professional bodies. He s a recipient of the Young Indian Zoologist of 20th Century Gold Medal by the Zoological Society of India (2000); P.- rof. T. N. Ananthakrishnan Foundation Award by the Prof. T. N. Ananthakrishnan Foundation, Chennai (2012); Rescholar Award of Excellence in Agricultural Entomology by the Association of Entomologists, Patiala (2014); and Prof. G. S. Shukla

Gold Medal by the Academy of Environmental Biology, India (2014). He has authored books including Concepts of Toxicology, Experimental Animal Physiology and Biochemistry, Kin Recognition and Oviposition Strategies in Aphidophagous Ladybirds-ansi-font-size:11.0pt;line-height:107%; font-family:"Calibri",sans. Professor Omkar has published about 150 research papers in international journals and 62 in Indian journals, 21 book chapters, and 14 popular science articles. Most of his research revolves around identifying and harnessing the potential of benefcial insects, in particular ladybird beetles, for which he is globally recognized. He has supervised 20 Ph. D. theses and completed about ten research projects funded by state and central government agencies. He is a member of the editorial board of the International Journal ;Calibri",sans-serif">of Tropical Insect Science, and chief editor of the Journal of Applied Bioscience besides being president of the International Society of Applied Biology. He works as a referee for about 40 international and 20 Indian journals of repute in addition to working as a subject expert in grant applications for the Swiss National Science Foundation, Switzerland, and a few central and state government funding agencies He is the recipient of prestigious travel awards from the Indian National Science Academy, through which he has traveled, collaborated, and worked with global experts on ladybird biology at the University of East Anglia, UK, and the University of South Bohemia and Czech Academy of Sciences, Czech Republic.
Show all