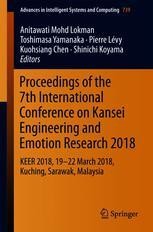 The proceedings gather a selection of refereed papers presented at the 7th International Conference on Kansei Engineering and Emotion Research 2018 (KEER 2018), which was held in Kuching, Malaysia from 19 to 22 March 2018.

The contributions address the latest advances in and innovative applications of Kansei Engineering and Emotion Research. The subjects include:

Assoc. Prof. Dr. Anitawati Mohd Lokman is Associate Professor at the Faculty of Computer and Mathematical Sciences, Universiti Teknologi MARA (UiTM), Malaysia. She received a Bachelor of Engineering in Information Engineering from the University of Fukui, Japan in 1994, and Master degree in Information Technology from UiTM in 2001. She earned her PhD in Science, with a concentration on Kansei Engineering and Emotional User Experience under the supervision of Professor Mitsuo Nagamachi and Professor Nor Laila Md Noor. She champions Kansei Engineering in Malaysia, entrusted with the knowledge by her Guru, via collaboration in research projects, co-author of books and research articles, as well as sharing medium of knowledge transfer in workshops and tutorials locally and internationally. She has also been a keynote speaker to a few international conferences and seminars. With encouraging response to the discipline, she founded Malaysia Association of Kansei Engineering (MAKE) in 2015, and appointed as the first president. She is also the Head of Research Intensive Group for Kansei/Affective Engineering (RIG KAE) in UiTM. She is known in the academia locally and internationally, and encouragingly become a reference expert in the field of Kansei Engineering, Emotion, Wellbeing, Quality of Life, Interface Design, Interaction Design, Product/Service Design, and Branding. She is currently active in converging Kansei Engineering to diverse field such as in Emotive Web, Culture & Design, Social Media, Pubic Service, Robot Interaction, and Emerging Internet Applications. She has authored over 100 publications at local and international level, in the form of books, conference papers and journals among others. Among recognitions she received are the Best Author of UiTM Award 2016, and honoured as Senior Member of the IEEE. She was also awarded with 30 Women Achievers & Leaders of Malaysia 2017 presented by Tan Sri Datin Paduka Hajah Zaleha Ismail, on behalf of CHRO Asia.

Prof. Dr. Toshimasa Yamanaka is currently an Executive Officer at the University of Tsukuba, Japan, and also a Provost and Professor at the Faculty of Art and Design at the same university. He teaches undergraduate and graduate courses in Product Design and Kansei Information. He earned his PhD in Kansei Science from the Graduate School of Comprehensive Human Sciences of the University of Tsukuba. Prof. Dr. Toshimasa Yamanaka has been appointed as a member of the Board of Directors of various local public and private sectors, and juries of various local and international bodies including Associate President, Executive Board of International Congress of the International Association of Societies of Design Research (2013), Executive Board Member of International Association of Universal Design (2013-present), Jury at the Kid’s Design Awards (2014-present), President of the Japanese Society for the Science of Design (2012-2016), Advisor of the Japan Society of Kansei Engineering (2011-present), Board member of the International Association of the Societies of Design Research (IASDR) (2005-present), Executive Board member of the Kansei Engineering and Emotion Research (KEER) (2007-present) and Jury at the Good Design Awards (2001, 2003). He also received several Good Design Awards, especially for PENTAX, such as PENTAX PocketBook mobile printer (1996), PENTAX ZOOM 105 (Compact camera) (1989), PENTAX LaserprinterLaserFold 240 (1989), PENTAX 7x21 DCF II-R binocular (1988), PENTAX Telescope 105 EDHF System (1987), PENTAX Telescope 75 EDHF-II System (1987), PENTAX 7x20 DCF II Binocular (1987), PENTAX Telescope 125 EDHF System (1985), and PENTAX 7x21 DCF-HD Binocular (1985). He is author of over 100 publications at international conferences and journals. His research areas of interest include design process, design analysis and information design.

Ir. Dr. Pierre (P.D.) Levy is currently an Assistant Professor at Eidhoven University of Technology, as well as President of European Kansei Group and Coordinator of the KEER steering committee. He graduated from Mechanical Engineering (specialty in Industrial Design) in Compiègne University of Technology, France (2001), and gained a PhD with honors in Kansei Science and received the Best Degree Dissertation Award at the University of Tsukuba, Japan in 2006. After a post-doctoral position at the Laboratory of Kansei Information Science at the Graduate School of Comprehensive Human Science at the University of Tsukuba, he was researcher and lecturer at Chiba University as well as lecturer at the University of Tsukuba. Ir. Dr. Pierre Levy was the recipient of Reviewer’s Favorite in International Association of Association of Societies of Design Research Conference, Netherlands in 2011, Best Paper Award at The 7th International Conference on Applied Human Factors and Ergonomics in 2016, and one of his student, which coached by him, Felix Ros, was a winner of the Interaction Award, Core77 Design Awards in 2016. He is currently working on rituals, looking at their complexity in terms of events and of time structure, and the meaning emerging from rituals. He also studies Japanese philosophy and culture, mostly embedded in the Japanese tea ceremony, and suggests the way they can contribute to the discipline of interaction design. He has contributed to many design and Kansei projects in Europe and in the world, especially the JSKE and the EKG.

Prof. Dr. Kuo Hsiang Chen is Professor at the Department of Creative Product Design, I-Shou University, Taiwan. He obtained his Bachelor Degree in Industrial Design at the National Cheng Kung University, Tainan, Taiwan in 1978, and Master Degree in Design at the Illinois Institute of Technology, Chicago, USA in 1984. In 1995, he received the PhD Degree in Design, also from Illinois Institute of Technology, Chicago. Since 2008 until now, he is the Founding President for TIK, and also joined other associations, including Global Talentrepreneur Innovation & Collaboration Association (2006 – Present), Ergonomic Society of Taiwan (1997 – Present), Chinese Institute of Design (1995 – Present), China Packaging Institute (1987 – Present) and Chinese Industrial Designers' Association (1979 – Present). Prof. Dr. Kuohsiang Chen was the recipient of many Honors and Awards, such as Winner, “Bellpipes - Wind Bell”, reddotarwad: design concept (2014), Excellence Award for 2010 research project presentation poster, Honorable Mention (Birdhouse by Students, Japan, 2000, as co-advisor), Silver Award, Yulong Nissan Automobile Design Competition in 2007 as an advisor and other recognitions. Moreover, he is author of over 150 publications at international conferences and journals, and also his specialties include form languages, form generation and style association, style reappearance, Kansei engineering, Kansei design, new product design & development, as well as information visualization.

Prof. Dr. Shinichi Koyama is currently Artistic Professor at the School of Art and Design, University of Tsukuba. He does research in Product Design, Information Design, Consumer Behavior, Visual Attention, Perception and Cognitive Psychology, Sensitivity, and Neuropsychology. He earned his PhD in Psychology from Boston University, where he also studied Master of Arts in the same field. He host Koyama Lab at the University of Tsukuba centralizing research on Design, Kansei, Psychology, and Brain. He has published over 150 publications including books, journals and conference papers at local and international level putting forward his specialties and skillset in his area of research.