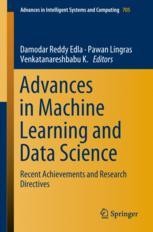 These days we find many computer programs that exhibit various useful learning methods and commercial applications. Goal of machine learning is to develop computer programs that can learn from experience. Machine learning involves knowledge from various disciplines like, statistics, information theory, artificial intelligence, computational complexity, cognitive science and biology. For problems like handwriting recognition, algorithms that are based on machine learning out perform all other approaches. Both machine learning and data science are interrelated. Data science is an umbrella term to be used for techniques that clean data and extract useful information from data. In field of data science, machine learning algorithms are used frequently to identify valuable knowledge from commercial databases containing records of different industries, financial transactions, medical records, etc.

Damodar Reddy Edla is Assistant Professor and Head in Department of Computer Science & Engineering, National Institute of Technology Goa, India. His research interests include Data Mining and Wireless Sensor Networks. He has completed his doctorate from Indian School of Mines, Dhanbad, India, in 2013. He has published more than 35 research papers in national and international journals and conference proceedings. He is editorial board member of 5 International journals.

Pawan Lingras is a graduate of IIT Bombay with graduate studies from University of Regina. He is currently a Professor and Director of Computing and Data Analytics at Saint Marys University, Halifax. He is also internationally active having served as a visiting professor at Munich University of Applied Sciences, IIT Gandhinagar, as a research supervisor at Institut Superieur de Gestion de Tunis, as a Scholar-in-Residence, and as a Shastri Indo-Canadian scholar. He has delivered more than 35 invited talks at various institutions around the world. He has authored more than 200 research papers in various international journals and conferences.  He has also co-authored three textbooks, and co-edited two books and eight volumes of research papers. His academic collaborations/co-authors include academics from Canada, Chile, China, Germany, India, Poland, Tunisia, U.K. and USA. His areas of interests include artificial intelligence, information retrieval, data mining, web intelligence, and intelligent transportation systems. He has served as the general co-chair, program co-chair, review committee chair, program committee member, and reviewer for various international conferences on artificial intelligence and data mining. He is also on editorial boards of a number of international journals. His research has been supported by Natural Science and Engineering Research Council (NSERC) of Canada for twenty-five years, as well as other funding agencies including NRC-IRAP and MITACS. He also served on the NSERC’s Computer Science peer review committee. He has been awarded an Alumni association excellence in teaching award, Student union’s faculty of science teaching award, and President’s award for excellence in research at Saint Mary’s University.

Venkatanareshbabu Kuppili is with the Machine Learning Group, Department of Computer Science and Engineering, National Institute of Technology Goa, India, where he is currently an Assistant Professor. He obtained doctoral degree from Indian Institute of Technology Delhi in 2014. He was with Evalueserve Pvt. Ltd., as a Senior Research Associate in 2009. He has been a Visiting Scientist with the Global Medical Technologies, California in 2017. He has been the Principal Investigator of many sponsored research and consultancy research projects in the field of neural networks and machine learning. He is also actively involved in teaching and project coordination for the Graduate and Post Graduate Program in Computer Science and Engineering Department at the National Institute of Technology Goa. He has authored a number of research papers published in reputed international journals in the area of neural networks, classification, and clustering.