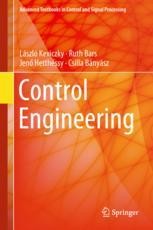 This book offers fundamental information on the analysis and synthesis of continuous and sampled data control systems. It includes all the required preliminary materials (from mathematics, signals and systems) that are needed in order to understand control theory, so readers do not have to turn to other textbooks. Sampled data systems have recently gained increasing importance, as they provide the basis for the analysis and design of computer-controlled systems. Though the book mainly focuses on linear systems, input/output approaches and state space descriptions are also provided. Control structures such as feedback, feed forward, internal model control, state feedback control, and the Youla parameterization approach are discussed, while a closing section outlines advanced areas of control theory.

Though the book also contains selected examples, a related exercise book provides Matlab/Simulink exercises for all topics discussed in the textbook, helping readers to understand the theory and apply it in order to solve control problems. Thanks to this combination, readers will gain a basic grasp of systems and control, and be able to analyze and design continuous and discrete control systems.

László KEVICZKY was born in Ráckeve, Hungary, on April 2, 1945. He graduated with a Higher Education Honors Degree from the Electrical Engineering Faculty of the Budapest University of Technology and Economics (BUTE) in 1968. In 1985 he was elected (as the second youngest) Corresponding Member of the Hungarian Academy of Sciences (HAS). In 1991 he became the founding member of the Hungarian Academy of Engineering and was appointed as a Foreign Member of the Royal Swedish Academy of Engineering Sciences.
From 1993 he is the Member of the HAS and elected as the Secretary General of the HAS. In 1996 he was elected for a second term of three years ending in 1999. Then he was the Vice-President of the HAS (mathematics and natural sciences) from 1999-2005. He was an elected member of the Presidium and the Directing Board of the HAS from 2005-2008. In 2005 he was elected as foreign member of the Polish Academy of Sciences.
Between 1981-84 he was the vice-chairman, then chairman (1984-90) of the Applications Committee in IFAC. From 1990-93 he was vice-chairman of the Technical Board. He was the member of the Council for the period of 1993-96 and re-elected for the next triennial. At the same time he was the chairman of the Awards and Election Committees. He served as the chairman of the Policy Committee from 2002-2005. He was the General Chair of ECC'2009 and he is was the president of EUCA between 2010-12.

Ruth Bars was born in Jerusalem, on September 2, 1941. She graduated at the Electrical Engineering Faculty of the Technical University of Budapest (TUB) in 1964. Since 1964 she has been working at the Department of Automation and Applied Informatics at TUB, now as honorary professor.
She has got the doctor of the university degree in 1976. In 1992 she has gained the Candidate of Sciences degree of the Hungarian Academy of Sciences, and PhD degree.
Her research interests are in predictive control and in developing new ways of control education. She has published with co-authors several university lecture notes and textbooks. She has more than 130 publications written mainly in English. In 2011 a book on predictive control has been published by Wiley with coauthors R. Haber and U. Schmitz: Predictive Control in Process Engineering: From the Basics to the Applications.
In 1999, 2003 and 2006 she was a visiting lecturer at the Helsinki University of Technology, Finland and in 2002 at the University of Louisiana, Lafayette, USA giving short PhD courses in predictive control. In 2008 she participated in a Marie Curie project at the University of Sevilla related to predictive control.

She has gained the Frigyes Csáki medal of the Hungarian Scientific Society for Automation, Measurement Technics and Informatics. In 2016 she obtained the Knight’s Cross medal of the Republic of Hungary.

Jenő Hetthéssy was born in Budapest, Hungary, on April 23, 1948. He graduated at the Electrical Engineering Faculty of the Technical University of Budapest (TUB) in 1971. To start with he worked for the Research Institute for Electric Power, then joined the staff of the the Department of Automation of TUB. As a visiting professor he spent a number of semesters at the Department of Electrical Engineering of the University of Minnesota, USA. Meanwhile he was invited to lead the Process Control Division of the Computer and Automation Research Institute (CARI), Hungarian Academy of Sciences. From 1994 till 2013 he was the vice-head of the Department of Automation and Applies Informatics, TUB. Presently he is a senior R&D advisor at the Department.

His special fields of interest are adaptive control of industrial processes and computer controlled systems. In 2013 he obtained the Knight’s Cross medal of the Republic of Hungary.

András Barta was born in Makó, Hungary, on November 16, 1961. He graduated at the Electrical Engineering Faculty of the Technical University of Budapest (TUB) in 1986. In 1999 he joined the Department of Automation and Applied Informatics, Budapest University of Technology and Economics. From 1999-2002 he worked as a research fellow, then from 2002 as assistant professor and senior lecturer.

His research field is control theory, pattern recognition. He supervised a number of student projects in these fields. He is member of IEEE Computer Society and member of the Hungarian Society of Automation, Measurement and Informatics.

Csilla BÁNYÁSZ was born in Újpest, Hungary, on February 10, 1946. She graduated at the Electrical Engineering Faculty of the Technical University of Budapest (TUB) in 1969. She was invited to the Computer and Automation Research Institute (CARI), HAS, by Tibor Vámos, former president of IFAC and she has been working there since 1969.

She is a senior research fellow of the institute and serves the IFAC NMO as chairperson (formerly secretary). She was the editor of several IFAC conferences, symposia and workshops organized in Hungary.

In 2013 she obtained the Knight’s Cross medal from the president of Hungary.