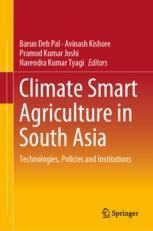 This book discusses various climate smart agro-technologies, their technical and economic feasibility across heterogeneous agro-climatic conditions, assessing farmers’ willingness to adopt those technologies, impact of climate smart technology in agricultural production and possible policy and investment opportunities to upscale it. Containing eight chapters, the book starts with a discussion about the methodological aspects of priority setting of the farm technologies across various regions of South Asia including Eastern Indo-Gangetic plain, Western Indo-Gangetic Plain and arid regions. Using data from field based trials and expert solicitations, the book next deliberates on a list of feasible technologies, assessed by constructing climate smart Feasibility Index.
Further on, there is an analysis, using stated preference method, of the behaviour of farmers in adopting climate smart technologies. Preference of women farmers has been given a special focus in this book. After discussing the method priority setting of the farm technologies, impact of climate smart technologies has been analysed using real time data. Government policies have been reviewed with the view of achieving climate smart agriculture in South Asia. The book also describes the optimization modelling framework for investment allocation and technology prioritization. The model integrates both the bio-physical and the economic optimization model to capture the agro-climatic heterogeneity within the region and the variability of technical feasibility across regions and crops. Results of this model will help policy makers to identify how much to invest, where to invest and what technologies to prioritize for investments.

Dr Barun Deb Pal is a Program Manager at the International Food Policy Research Institute (IFPRI) - South Asia chapter, New Delhi, India. He received his Master’s in Economics from the University of Calcutta, India and his PhD from Jadavpur University, Kolkata, India. He has more than 10 years of experience in economic policy modelling with a special focus on climate change policy analysis. He has many research articles and books to his credit. His most recent articles have been published in the Journal of Economic Structures, Economic Systems Research, Journal of Science and Technology, and his co-authored book “GHG Emissions and Economics Growth – A Computable General Equilibrium Model Based Analysis for India” was published by Springer.

Dr Avinash Kishore obtained his Master’s in Public Affairs from Princeton University, USA and his PhD in Public Policy from Harvard University, USA. He is interested in agriculture, environment, and development economics. At the International Food Policy Research Institute (IFPRI) South Asia chapter, New Delhi, India he is working as a Research Fellow and is engaged in research projects that seek to bridge the gap between laboratories and farms in Indian agriculture using action research in collaboration with agricultural universities, agribusiness firms and farmers. He has published more than 15 articles in journals of international repute like Water International, Water Policy, Food Policy, Economic Development and Cultural Change and Economic and Political Weekly.

Dr. Narendra Kumar Tyagi is an independent researcher in the agricultural science discipline and he is based in Ghaziabad, Uttar Pradesh, India. Dr. Tyagi graduated in Agricultural Engineering from GBPUAT, Pant Nagar  in 1967,  obtained Master's degree in Soil and Water Conservation Engineering from IIT Kharagpur in 1969 and PhD in Civil Engineering  from JNTU Hyderabad in 1984.He attended USU Logan, USA, for Post-Doctoral Research in Environmental Planning  for Salinity Control. His professional career spans over more than three decades and he known for his outstanding research in land and water management. During his long professional career, he served various key positions in ICAR including Director of Central Soil Salinity Research Institute, Karnal 1994-2004; Member, Agricultural Scientists' Recruitment Board, New Delhi between 2005 and 2011.