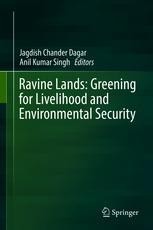 This book, the only one of its kind on ravine lands, reflects the significant advances made over the past two decades in our understanding of gully erosion, its controlling factors, and various aspects of gully erosion. It also addresses central research gaps and unanswered questions, which include historical studies on gully erosion to better understand the different stages of their formation; appropriate measuring techniques for monitoring or assessing the geological and hydrological parameters and processes involved in gully development; interaction of hydrological and other soil degradation processes; ecology and biodiversity of fragile ravines; impact of climate and environmental changes on soil erosion processes; development of effective and reliable gully erosion models; effective gully prevention and control measures; watershed-based management options; and ravine rehabilitation policies.

The present book is a highly timely publication and deals with various aspects of ravine ecology and rehabilitation of degraded lands, particularly with the aid of biological approaches. As such, it offers a valuable guide for all scientists working in the fields of soil conservation / rehabilitation and agroforestry, students, environmentalists, educationists, and policymakers. More importantly, it focuses on the rehabilitation of one of the world’s most degraded and fragile ecosystems, ensuring the livelihoods of resource-poor farmers and landless families living in harsh ecologies that are more vulnerable to climate change.
Show all
About the authors

Dr Jagdish Chander Dagar has been well recognized both nationally and internationally and grown professionally through strong pursuit in agricultural, ecological and agroforestry research which is evident from his more than 280 research papers published in peer-reviewed Journals, book chapters and papers in proceedings of conferences/symposia; 12 books authored/ edited; 10 research bulletins and more than 50 popular articles. He was the Assistant Director General at the head-quarters of ICAR and Emeritus Scientist. His research interest has been in the areas of biosaline agriculture, agroforestry, management of natural resources, rehabilitation of degraded lands, biodrainage, ethnobotany, plant ecology, climate change, sustainable agriculture and policy. Recognizing the research contributions, Dr Dagar has been conferred with several awards and honours: Sajjad Memorial Gold Medal, Hari Om Asharam Trust Award of ICAR, Swami Pranavananda Saraswati National Award of UGC, CSSRI Excellence Award on Soil Salinity & Water Management, and Dr KG Tejwani Award for Excellence in Agroforestry Research & Development. Further, he is Fellow of National Academy of Agricultural Sciences and Fellow & Life Member of several other professional societies: International Society of Tropical Ecology, Indian Botanical Society, National Institute of Ecology, Range Management Society of India, National Environmental Science Academy, Andaman Science Association, and Indian Society of Soil Salinity & Water Quality. He has also been consulting several national and international agencies such as FAO of UN, CIMMYT, and Haryana Forest Department. Dr Dagar has travelled in several countries in different capacities and had been member of several Research Advisory Committees and Management Committees of ICAR Institutes and Board of Studies in Universities. He is Chief Editor of Journal Soil Salinity & Water Quality and also active in social services.