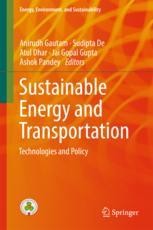 This book presents an integrated approach to sustainably fulfilling energy requirements, considering various energy-usage sectors and applicable technologies in those sectors. It discusses smart cities, focusing on the design of urban transport systems and sources of energy for mobility. It also shares thoughts on individual consumption for ensuring the sustainability of energy resources and technologies for emission reductions for both mobility and stationary applications. For the latter, it examines case studies related to energy consumption in the manufacturing sector as well as domestic energy requirements. In addition it explores various distribution and policy aspects related to the power sector and sources of energy such as coal and biomass. This book will serve as a valuable resource for researchers, practitioners, and policymakers alike.

Anirudh Gautam from the Indian Railway Service of Mechanical Engineers built India's first 4000 hp diesel locomotive under ToT with EMD General Motors of USA, for which he was honoured with the National Award by the Railway Minister. Dr Gautam has published 10 technical papers and 50 technical reports. He is currently Executive Director of SRESTHA, newly formed research wing of Indian Railways. He holds a PhD in IC Engines from IIT Kanpur.

Sudipta De is a Professor at the Department of Mechanical Engineering, Jadavpur University, India. He received his PhD from IIT Kharagpur and was a guest researcher at the Department of Energy Sciences, Lund University, Sweden for over a year. He has also worked for the Erasmus Mundus External Cooperation Window with specialization in sustainable energy engineering. He is currently coordinating a 3-year Indo-Norwegian collaboration project and is involved in another EU project with Finland and Germany.

Atul Dhar has been an Assistant Professor at the IIT Mandi since 2013. He received his M.Tech. and PhD from the Department of Mechanical Engineering, IIT Kanpur in 2006 and 2013, respectively. He was awarded the European Union Erasmus Mundus Fellowship in 2013 and Young Scientist Award from the International Society for Energy, Environment and Sustainability in 2015. He has published more than 35 international peer-reviewed journal papers.

Jai Gopal Gupta has been working with GWEC, Rajasthan, India as Head and Assistant Professor in the Department of Mechanical Engineering since September 2007. His areas of interest are alternative fuels, biofuels, spray characterisation, and engine performance characterisation. He has worked with the Combustion Engine and Energy Conversion (CEnEC) laboratory, Hanyang University, South Korea under the Indo-Korean Research Internship (IKRI) Programme.

Ashok Pandey PhD, FBRS, FRSB, FNASc, FIOBB, FISEES, FAMI is currently a Distinguished Scientist at CSIR-Indian Institute for Toxicology Research, India. He has written over 1200 publications/communications, including 16 patents, 55 books, 132 book chapters and 460 original and review papers. He has received the Lifetime Achievement Award from ISEES; fellowship of Royal Society of Biology, UK and European Academy of Sciences and Arts, Germany; and many other laurels. He is the Editor in Chief of Bioresource Technology and serves in advisory and editorial capacity for many international journals and is editor for two book series.