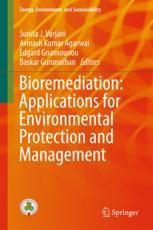 Dr. Sunita Varjani is a Scientific Officer at the Gujarat Pollution Control Board, India. She holds an M.Sc. degree in Microbiology (2009) and a Ph.D. in Biotechnology (2014). Her major areas of research are Industrial and Environmental Microbiology/Biotechnology and Molecular Biology. Dr. Varjani has authored 35 publications, including one book, 19 book chapters/reviews and 15 original research papers. She has received several awards and honours, including the Young Scientist Award at the AFRO-ASIAN Congress on Microbes for Human and Environmental Health, New Delhi (2014) and Best Paper Awards for oral presentations at national and international conferences in 2008, 2012 and 2013. Further, she serves on the editorial board of the Journal of Energy and Environmental Sustainability.

Dr. Edgard Gnansounou is a Professor of Modelling and Planning of Energy Systems at the Swiss Federal Institute of Technology Lausanne (EPFL), Switzerland, where he is the Director of the Bioenergy and Energy Planning Research Group. His current research work focuses on techno-economic and environmental assessment of bio-refinery schemes based on the conversion of agricultural residues. He is leading research projects in this field in several countries including Brazil, Colombia and South Africa. In addition to publishing numerous papers in high-impact scientific journals, Dr. Gnansounou is a member of the editorial board of Bioresource Technology. He graduated with an M.S. in Civil Engineering and a Ph.D. in Energy Systems at the Swiss Federal Institute of Technology Lausanne. He has been a visiting researcher in the USA, France and India.

Dr. G. Baskar is currently working as a Professor of Biotechnology at St. Joseph’s College of Engineering, Chennai, India. He has published more than 100 papers in national and international forums, as well as five book chapters. His current research focus is on biofuels, therapeutic proteins, microbial enzymes, nanomedicine and nanocatalysis. The International Bioprocessing Association (International Forum on Industrial Bioprocesses) conferred Dr. Baskar its Young Scientist Award (2015) in recognition of his contributions in the area of Bioprocess Technology. He also received the Indian Society for Technical Education’s ISTE-Sayed Sajid Ali National Award (2016) for his outstanding research work on Renewable Energy.