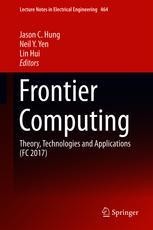 This book gathers the proceedings of the 6th International Conference on Frontier Computing, held in Osaka, Japan on July 12–14, 2017, and provides comprehensive coverage of the latest advances and trends in information technology, science and engineering. It addresses a number of broad themes, including communication networks, business intelligence and knowledge management, web intelligence, and related fields that inspire the development of information technology. The respective contributions cover a wide range of topics: database and data mining, networking and communications, web and internet of things, embedded systems, soft computing, social network analysis, security and privacy, optical communication, and ubiquitous/pervasive computing. Many of the papers outline promising future research directions, and the book will benefit students, researchers and professionals alike. Further, it offers a useful reference guide for newcomers to the field.

Dr. Neil Y. Yen is an Associate Professor at the University of Aizu, Japan. He completed doctorates in Human Informatics at Waseda University, Japan, and in Engineering at Tamkang University, Taiwan, ROC in March and June 2012, respectively. Actively involved as an editor for journals and books, Dr. Yen’s primary research interests are in the scope of human-centered computing and big data.