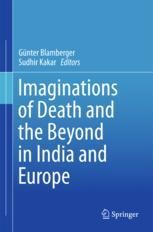 Imaginations of Death and the Beyond in India and Europe

This volume explores current images of afterlife/afterdeath and the presence of the dead in the imaginations of the living in Indian and European traditions. Specifically, it focuses on the deepest and most fundamental uncertainty of human existence---the awareness of human mortality, on which depends any assignment of meaning to earthly existence as also to notions of worldly and otherworldly salvation. This central idea is addressed in the literature, arts, audiovisual media and other cultural artefacts of the two traditions. The chapters are based on two main assumptions: First, that one cannot report on the direct experience of death; so it is only possible to speak allegorically of it. Second, in contemporary Western societies, marked by structural atheism, people look at literature, the arts and mass media to study their depiction and reading of traditionally religious questions of disease, death and the Beyond. This is in contrast to Asian civilizations whose preoccupation with death and Beyond is persistent and perhaps central to the civilizations’ highest thought.

The chapters cover a wide spectrum of disciplinary approaches, from psychoanalysis to religious, anthropological, literary and film studies, from sociology and philosophy to art history, and address issues of unsettling power: comforting illusions of afterlife; the relations between afterlife and fertility; visions of technological immortalization of mankind; the problem of thinking about death after the “death of God”; socialist utopias of bodily immortality; fear of Hell and punishment; different concepts in relating the living and the dead; near-death experiences; and cultural practices of spiritualism, occultism and suicide.

Günter Blamberger holds a Chair in German Philology at the University of Cologne and is Director of the Center for Advanced Study in the Humanities (Internationales Kolleg Morphomata) in Cologne. Since 1996 he has been President of the International Kleist-Society, and editor of the Kleist-Yearbook. He was responsible for the Kleist-Bicentenary in 2011. His biography on Heinrich von Kleist (Fischer, 2011) received an award as Germany’s best non-fiction book in 2011 and will be published in English in 2018. He is a member of the German Academy of Language and Literature. His main areas of research include German and European literature of the 19th and 20th centuries, moralistic philosophy, interdisciplinary and cross-cultural studies on creativity, contemporary German literature and film, figurations of melancholy, figurations of death. His recently published books are On Creativity, Ed. (Penguin Press, 2015), Sind alle Denker traurig? Ed. (Fink, 2015), Venus as Muse, Ed. (Brill/Rodopi, 2015), Auf schwankendem Grund. Dekadenz und Tod im Venedig der Moderne, Ed. (Fink, 2014), Figuring Death, Figuring Creativity: On the Power of Aesthetic Ideas (Fink, 2013), Peter Esterházy, Ed. (Fink, 2013), Möglichkeitsdenken, Ed. (Fink, 2013), Ökonomie des Opfers. Literatur im Zeichen des Suizids, Ed. (Fink, 2013), Daniel Kehlmann, Ed. (Fink, 2012)..

Sudhir Kakar, psychoanalyst and writer, has been Lecturer at Harvard University, Research Fellow at Harvard Business School, Professor at the Indian Institute of Management, Ahmedabad and Head of Department of Humanities and Social Sciences at the Indian Institute of Technology Delhi. He has been a Senior Fellow at the Centre for Study of World Religions at Harvard as also Visiting Professor at the universities of Chicago, Harvard, McGill, Melbourne, Hawai’i, Vienna; a Fellow at the Institute of Advanced Study in Princeton, Wissenschaftskolleg Berlin and Morphomata Center for Advanced Studies in the Humanities, Cologne. Kakar's many honours include the Kardiner Award of Columbia University, Boyer Prize for Psychological Anthropology of the American Anthropological Association, Germany’s Goethe Medal, Rockefeller Residency, McArthur Fellowship, Distinguished Service Award of Indo-American Psychiatric Association, Fellow of the National Academy of Psychology, Merck Tagore Award, the Bhabha, Nehru and Indian Council of Social Science Research National Fellowships in India and Germany’s Order of Merit. His latest books are Young Tagore: The Makings of a Genius and the novel The Devil Take Love.

“This is an inspiring contribution, opening questions about the specificity of ‘modern’ conceptions of death and the relation between ‘religious’ and ‘artistic’ representations. … the volume provides rich and thought-provoking contributions from a fine group of scholars. The book is successful in showing that the universal experience of death has created an immensely diverse set of religious and cultural representations that cannot easily be classified as ‘Western,’ ‘Eastern,’ ancient, or modern.” (Philippe Bornet, readingreligion.org, August, 2018)