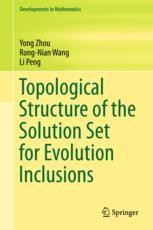 Topological Structure of the Solution Set for Evolution Inclusions

This book systematically presents the topological structure of solution sets and attractability for nonlinear evolution inclusions, together with its relevant applications in control problems and partial differential equations. It provides readers the background material needed to delve deeper into the subject and explore the rich research literature.

Based on extensive research work conducted by the authors and other experts over the past four years, the information presented is cutting-edge and comprehensive. As such, the book fills an important gap in the body of literature on the structure of evolution inclusions and its applications.

Yong Zhou is a Professor at the Xiangtan University from Hunan, P.R. China. He is an associate editor of six mathematical journals and a guest editor of twelve special issues of international journals indexed in the Science Citation Index (SCI). His research fields include fractional differential equation, evolution equations and inclusions, control theory of differential equations. Zhou has published 200 papers in these fields, and has coauthored 5 related published monographs. Professor Zhou was selected in 2014, 2015 and 2016 as one of the Highly Cited Researchers in Mathematics.

Rong-Nian Wang obtained his PhD (2006) in Mathematics from the University of Science and Technology of China, Hefei, China. In 2015, he joined the Department of Mathematics at the Shanghai Normal University, Shanghai, China as a faculty member, where he is now a Professor of Mathematics. His research interests are in the qualitative theory of partial differential equations, abstract evolution equations and inclusions, infinite-dimensional dynamical systems. He has published about 30 papers, partly in the journals such as “Mathematische Annalen”, “Journal of Functional Analysis” and “Journal of Differential Equations”.

Li Peng received her MS and PhD degrees in Mathematics from Xiangtan University, Hunan, P.R. China. She is now a postdoctoral fellow at the Xiangtan University. Her research interests are in the theory of fractional partial differential equations, abstract evolution equations and inclusions.

“The book offers a comprehensive, nicely documented study of the above-mentioned problems, based on recent results in the literature on the subject. It will be very useful for postgraduate students and researchers alike interested in topological methods for differential inclusions.” (Irene Benedetti, Mathematical Reviews, November, 2018)

“This book will be useful to researchers and graduate students interested on the structure of the solution sets of evolution inclusion and its applications.” (Sotiris K. Ntouyas, zbMATH 1382.34001, 2018)