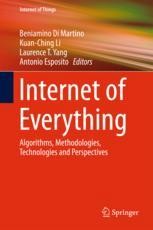 This book focuses on the Internet of Everything and related fields. The Internet of Everything adds connectivity and intelligence to just about every device, giving it special functions. The book provides a common platform for integrating information from heterogeneous sources. However, this can be quite reductive, as the Internet of Everything provides links not only among things, but also data, people, and business processes. The evolution of current sensor and device networks, with strong interactions between people and social environments, will have a dramatic impact on everything from city planning, first responders, the military and health.

Such a shared ecosystem will allow for the interaction between data, sensor inputs and heterogeneous systems. Semantics is a fundamental component of this since semantic technologies are able to provide the necessary bridge between different data representations, and to solve terminology incongruence.

Integrating data from distributed devices, sensor networks, social networks and biomedical instruments requires, first of all, the systematization of the current state of the art in such fields. Then, it is necessary to identify a common action thread to actually merge and homogenize standards and techniques applied in such a heterogeneous field. The exact requirements of an Internet of Everything environment need to be precisely identified and formally expressed, and finally, the role of modern computing paradigms, such as Cloud and Fog Computing, needs to be assessed with respect to the requirements expressed by an Internet of Everything ecosystem.

Beniamino Di Martino is Full Professor of Information Systems at the Second University of Naples (Italy), vice Director of the Department of Industrial and Information Engineering. He is author of 10 international books and more than 200 publications in international journals and conferences. He is Project Coordinator of EU funded FP7-ICT Project mOSAIC, and has been participating to various research projects supported by EC, national and international organizations. He is Editor / Associate Editor of seven international journals and Editorial Board Member of several international journals. He served as general and program chairman, and member in Program Committees, of several international conferences. He has been vice Chair of the Executive Board of the IEEE CS Technical Committee on Scalable Computing. He is member of the IEEE Working Group for the IEEE P3203 Standard on Cloud Interoperability, of the IEEE Intercloud Testbed Initiative, of the Cloud Standards Customer Council, of the Cloud Computing Experts' Group of the European Commission. He acts as Co-Chair of the Nomination Committee for the IEEE ``Award of Excellence in Scalable Computing''. His research interests include: Knowledge Discovery and Management, Semantic Web and Semantic Web Services, Semantic based Information Retrieval, Cloud Computing, Big Data Intelligence, High Performance Computing and Architectures, Mobile and Intelligent Agents and Mobile Computing, Reverse Engineering, Automated Program Analysis and Transformation, Algorithmic Patterns Recognition and Program Comprehension, Image analysis.

Kuan-Ching Li is currently a Professor in the Department of Computer Science and Information Engineering at the Providence University, Taiwan. He is a recipient of awards from Nvidia, Ministry of Science and Technology (MOST)/Taiwan and support from a number of industrial companies, as also received guest and distinguished chair professorships from several universities in China and other countries. He has been actively involved in numerous conferences and workshops in program/general/steering conference chairman positions and as a program committee member, and has organized numerous conferences related to high-performance computing and computational science and engineering.

Professor Li is the Editor-in-Chief of several technical publications such as International Journal of Computational Science and Engineering (IJCSE), International Journal of Embedded Systems (IJES), and International Journal of High Performance Computing and Networking (IJHPCN), all published by Inderscience. He also serves as an editorial board member and a guest editor for a number of journals. In addition, he is the author or editor of several technical professional books published by CRC Press, Springer, McGraw-Hill, and IGI Global. His topics of interest include GPU/manycore computing, Big Data, and cloud. He is a Member of the AAAS, a Senior Member of the IEEE, and a Fellow of the IET.

Laurence T. Yang is a professor in the Department of Computer science at St. Francis Xavier University. He graduated from Tsinghua University, China and got his Ph.D. in Computer Science from University of Victoria, Canada. His current research includes parallel and distributed computing, embedded and ubiquitous/pervasive computing, big data. He has published around 300 international journal papers in the above areas of which 50% are IEEE/ACM Transactions and Journals; others are mainly published at Elsevier, Springer and Wiley. He has been involved actively in conferences and workshops as a program/general/steering conference chair and numerous conference and workshops as a program committee member. He served as the vice-chair of IEEE CS Technical Committee of Supercomputing Applications (2001-2004), the chair of IEEE CS Technical Committee of Scalable Computing (2008-2011), and the chair of IEEE CIS Task force on Ubiquitous Computing and Intelligence (2009-2013). He was in the steering committee of IEEE/ACM Supercomputing conference series (2008-2011), and was in the National Resource Allocation Committee (NRAC) of Compute Canada (2009-2013), as well as the scientific committee chair (2012-2013) for Engineering, Mathematics and Computing Science of Compute Canada. He was the vice-chair (2014) and the chair (2015) of IEEE Canada Atlantic Section.  Now he is the chair of IEEE SMC Technical Committee on Cybermatics (2016-) and vice-chair of IEEE CIS Task Force on Smart World (2016-). In addition, he is the editors-in-chief of several international journals. He is serving as an editor for many international journals (such as IEEE Systems Journal, IEEE Access, Future Generation of Computer Systems (Elsevier), Information Sciences (Elsevier), Information Fusion (Elsevier), Big Data Research (Elsevier)). He has been acting as an author/co-author or an editor/co-editor of more than 25 books from well-known publishers. The book “Mobile Intelligence” from Wiley 2010 received an Honorable Mention by the American Publishers Awards for Professional and Scholarly Excellence (The PROSE Awards).

Antonio Esposito graduated in July 2013 with a master thesis on the recognition of Design Patterns from UML documentation through semantic approaches. Currently he is a Ph.D. student at the Second University of Naples and he is working on extending his previous research to analyze source code for patterns recognition. He participated in research projects supported by international and national organizations, such as CoSSMic Smart Cities FP7, Toreador H2020. His main interests are Software Engineering, Cloud Computing, Design and Cloud Patterns, Semantic based Information Retrieval.
Show all