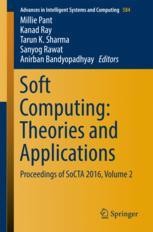 This book focuses on soft computing and its applications to solve real-life problems occurring in different domains ranging from medical and health care, supply chain management and image processing to cryptanalysis. It presents the proceedings of International Conference on Soft Computing: Theories and Applications (SoCTA 2016), offering significant insights into soft computing for teachers and researchers and inspiring more and more researchers to work in the field of soft computing.

>The term soft computing represents an umbrella term for computational techniques like fuzzy logic, neural networks, and nature inspired algorithms. In the past few decades, there has been an exponential rise in the application of soft computing techniques for solving complex and intricate problems arising in different spheres of life. The versatility of these techniques has made them a favorite among scientists and researchers working in diverse areas. SoCTA is the first international conference being organized at Amity University Rajasthan (AUR), Jaipur. The objective of SoCTA 2016 is to provide a common platform to researchers, academicians, scientists, and industrialists working in the area of soft computing to share and exchange their views and ideas on the theory and application of soft computing techniques in multi-disciplinary areas. The aim of the conference is to bring together young and experienced researchers, academicians, scientists, and industrialists for the exchange of knowledge. SoCTA especially encourages the young researchers at the beginning of their career to participate in this conference and present their work on this platform.
Show all
About the authors

Dr. Millie Pant is an associate professor in the Department of Paper Technology, Indian Institute of Technology Roorkee (IIT Roorkee) in India. A well-known figure in the field of swarm intelligence and evolutionary algorithms, she has published several research papers in respected national and international journals.

Dr. Kanad Ray is a professor of Physics at the Department of Physics at the Amity School of Applied Sciences, Amity University Rajasthan (AUR), Jaipur. In an academic career spanning over 19 years, he has published and presented research papers in several national and international journals and conferences in India and abroad. He has authored a book on the Electromagnetic Field Theory. Dr Ray’s current research areas of interest include cognition, communication, electromagnetic field theory, antenna & wave propagation, microwave, computational biology, and applied physics.

Dr. Tarun Kumar Sharma has a Ph.D. in artificial intelligence as well as MCA and MBA degrees, and is currently associated with the Amity University Rajasthan (AUR) in Jaipur. His research interests encompass swarm intelligence, nature-inspired algorithms and their applications in software engineering, inventory systems, and image processing. He has published more than 60 research papers in international journals and conferences. He has over 13 years of teaching experience and has also been involved in organizing international conferences. He is a certified internal auditor and a member of the Machine Intelligence Research (MIR) Labs, WA, USA and Soft Computing Research Society, India.

Dr. Anirban Bandyopadhyay is a Senior Scientist in the National Institute for Materials Science (NIMS), Tsukuba, Japan. Ph.D. from Indian Association for the Cultivation of Science (IACS), Kolkata 2005, on supramolecular electronics. During 2005–2008 selected as Independent Researcher, ICYS Research Fellow in the International Center for Young Scientists (ICYS), NIMS, Japan, he worked on brain-like bio-processor building. In 2007, he started as permanent Scientist in NIMS, working on the cavity resonator model of human brain and brainlike organic jelly. During 2013–2014 he was a visiting professor in Massachusetts Institute of Technology (MIT), USA. He has received many honors such as Hitachi Science and Technology award 2010, Inamori Foundation award 2011–2012, Kurata Foundation Award, Inamori Foundation Fellow (2011-), Sewa Society International member, Japan etc.

Geometric phase space model of a human brain argues to replace Turing tape with a fractome tape, and built a new geometric-musical language which is made to operate that tape. Built prime metric has to replace space-time metric. Designed and built multiple machines and technologies include: (1) angstrom probe for neuron signals, (2) dielectric imaging of neuron firing, (3) single protein and its complex structure’s resonant imaging, and (4) fourth circuit element Hinductor. A new frequency fractal model is built to represent biological machines. His group has designed and synthesized several forms of organic brain jelly (programmable matter) that learns, programs and solves problems by itself for futuristic robots during 2000–2014, also several software simulators that write complex codes by itself.
Show all