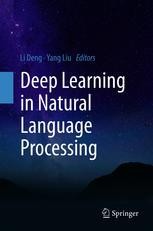 In recent years, deep learning has fundamentally changed the landscapes of a number of areas in artificial intelligence, including speech, vision, natural language, robotics, and game playing. In particular, the striking success of deep learning in a wide variety of natural language processing (NLP) applications has served as a benchmark for the advances in one of the most important tasks in artificial intelligence.

This book reviews the state of the art of deep learning research and its successful applications to major NLP tasks, including speech recognition and understanding, dialogue systems, lexical analysis, parsing, knowledge graphs, machine translation, question answering, sentiment analysis, social computing, and natural language generation from images. Outlining and analyzing various research frontiers of NLP in the deep learning era, it features self-contained, comprehensive chapters written by leading researchers in the field. A glossary of technical terms and commonly used acronyms in the intersection of deep learning and NLP is also provided.

The book appeals to advanced undergraduate and graduate students, post-doctoral researchers, lecturers and industrial researchers, as well as anyone interested in deep learning and natural language processing.

Li Deng is the Chief Artificial Intelligence Officer of Citadel since May 2017. Prior to Citadel, he was the Chief Scientist of AI, the founder of Deep Learning Technology Center, and Partner Research Manager at Microsoft. Prior to Microsoft, he was a tenured full professor at the University of Waterloo in Ontario, Canada as well as teaching and conducting research at MIT (Cambridge), ATR (Kyoto, Japan) and HKUST (Hong Kong). He is a Fellow of the IEEE, a Fellow of the Acoustical Society of America, and a Fellow of the ISCA. He has also been an Affiliate Professor at University of Washington since 2000. He was an elected member of Board of Governors of the IEEE Signal Processing Society, and was Editors-in-Chief of IEEE Signal Processing Magazine and of IEEE/ACM Transactions on Audio, Speech, and Language Processing (2008-2014), for which he received the IEEE SPS Meritorious Service Award. In recognition of the pioneering work on disrupting speech recognition industry using large-scale deep learning, he received the 2015 IEEE SPS Technical Achievement Award for “Outstanding Contributions to Deep Learning and to Automatic Speech Recognition." He also received numerous best paper and patent awards for the contributions to artificial intelligence, machine learning, natural language processing, information retrieval, multimedia signal processing, and speech processing. He is an author or co-author of six technical books.

Yang Liu is an associate professor at the Department of Computer Science and Technology, Tsinghua University. He received his PhD degree from the Chinese Academy of Sciences Institute of Computing Technology in 2007. His research focuses on natural language processing and machine translation. He has published over 50 papers in leading NLP/AI journals and conferences such as Computational Linguistics, ACL, AAAI, EMNLP, and COLING. He won the COLING/ACL 2006 Meritorious Asian NLP Paper Award and the National Science and Technology Progress Award second prize. He served as Associate Editor of ACM TALLIP, ACL 2014 tutorial co-chair, ACL 2015 local arrangement co-chair, IJCAI 2016 senior PC, ACL 2017 area co-chair, EMNLP 2016 area co-chair, SIGHAN information officer, and the general secretary of the Computational Linguistics Technical Committee of Chinese Information Processing Society.