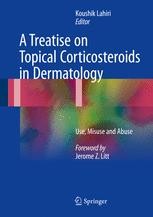 A Treatise on Topical Corticosteroids in Dermatology

Use, Misuse and Abuse

This treatise aims to fill up the lacuna and to contribute significantly to the dissemination of knowledge about the indication/contraindication, mechanism of action, ethical use, side-effects and various other facets related to topical corticosteroid.

Improper/incomplete knowledge about topical corticosteroids’ mechanism of action, indications, classifications, and contraindications has produced a rapid rise in the incidence of improper use of these drugs, which could potentially bring disrepute to this entire group of amazing drugs.

Responsibility for disseminating proper knowledge regarding when, where, and how to use TC both to internists and patients primarily rests with dermatologists. In this regard, the benefits of rational and ethical use and the potential harm of overuse and misuse for nonmedical, especially cosmetic purposes, should be clearly conveyed before prescribing TC.

Dr. Koushik Lahiri is the editor of the Indian Journal of Dermatology, one of the directors and vice president nominate of the International Society of Dermatology and the immediate past president of the Association of Cutaneous Surgeons of India.

Dr. Lahiri has published more than 100 articles in several indexed journals in the last two decades, and contributed several chapters in different textbooks. He has compiled an extremely popular mega project ‘100 interesting cases in Dermatology’ and edited a highly acclaimed exhaustive compendium ‘Pigmentary Disorders’ and the first ‘Textbook of Lasers in Dermatology’.

He has received various national and international awards, including the two highest orations awards for Indian Dermatologists, the Dr. B M Ambady memorial oration and Dr. P N Behl oration.

As the former honorary national general secretary of IADVL Dr. Lahiri conceptualized and proposed the IADVL Academy of Dermatology, which has now become the academic lifeline for Indian dermatologists. ACSI Academy of Dermatosurgery was also his brain child.

Today his name is inseparable with an extremely familiar entity among the dermatologist community in India, TSDF or Topical Steroid Dependent/Damaged Face – a term he coined.

As a tireless protagonist in the fight against the misuse of topical corticosteroids in India, Dr. Lahiri has worked relentlessly to sensitize other doctors (even dermatologists), government agencies, chemists, media and the common people regarding this shameful practice. As the founder chairperson of the countrywide IADVL Taskforce Against Topical Steroid Abuse (ITATSA) he became the face of a historic and epoch-making movement of Indian Dermatologists.

As the sixth-ever Indian he has received the International League of Dermatology Societies (ILDS) prestigious Certification of Appreciation (CoA) award. He was the first Indian to be honored for outstanding leadership, with special recognition from the Rutgers State University of New Jersey and New Jersey Medical School Chapter of Sigma Xi, the Scientific Research Society.
Show all