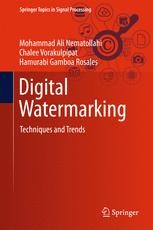 Today, the illegal manipulation of genuine digital objects and products represents a considerable problem in the digital world. Offering an effective solution, digital watermarking can be applied to protect intellectual property, as well as fingerprinting, enhance the security and proof-of-authentication through unsecured channels.

Dr. Mohammad Ali Nematollahi was born in 1986 in Shiraz, Iran. He received his B.S. in computer engineering (software) from Yazd University, Iran in 2008. He completed his master's degree in computer engineering (software) at the Islamic Azad University (IAU), Dubai, UAE in 2011, where he was also a lecturer from 2010 to 2011. He holds a Ph.D in computer and embedded systems engineering from Universiti Putra Malaysia (UPM). He has published numerous articles in international journals. His research interests include digital signal processing, speaker recognition and digital watermarking.

Dr. Chalee Vorakulpipat received his B.Eng. in electronics engineering from King Mongkut’s Institute of Technology Ladkrabang in Thailand and his M.S. in information technology from Kasetsart University in Thailand. He was awarded a scholarship from the Royal Thai Government to pursue a doctoral study. He earned his PhD in information systems from the University of Salford, UK. He is currently a senior researcher and head of the Cybersecurity Laboratory at the National Electronics and Computer Technology Center of Thailand. He has been involved in several projects in information security, mobile device management, social networking sites, ubiquitous computing, context-aware computing, e-health and mobile application development. He has written over 30 refereed publications in these areas, which have appeared in conference proceedings and journals such as Computers & Security, Advanced Engineering Informatics, Automation in Construction, Knowledge Engineering Review, and ETRI Journal. He also serves on the National Information Security of Thailand subcommittee. He also works as a lecturer for information systems courses at several universities in Thailand. He holds information security professional certificates including CISSP, CISA and IRCA:ISMS Lead Auditor, and a project management professional certificate - PMP.

“This book introduces many watermarking techniques, applied to a wide range of media, and discusses the tradeoffs between different techniques. … it will serve as a great introductory resource for anyone (both researchers and practitioners) who is a beginner in this field and wants to familiarize themselves with the available techniques. Each chapter has an extensive references section that can then be used as a guide for more in-depth study.” (Andrew Kalafut, Computing Reviews, January, 2017)