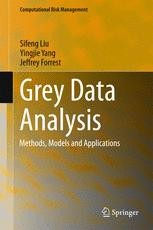 This book inclusively and systematically presents the fundamental methods, models and techniques of practical application of grey data analysis, bringing together the authors’ many years of theoretical exploration, real-life application, and teaching. It also reflects the majority of recent theoretical and applied advances in the theory achieved by scholars from across the world, providing readers a vivid overall picture of this new theory and its pioneering research activities.
The book includes 12 chapters, covering the introduction to grey systems, a novel framework of grey system theory, grey numbers and their operations, sequence operators and grey data mining, grey incidence analysis models, grey clustering evaluation models, series of GM models, combined grey models, techniques for grey systems forecasting, grey models for decision-making, techniques for grey control, etc. It also includes a software package that allows practitioners to conveniently and practically employ the theory and methods presented in this book. All methods and models presented here were chosen for their practical applicability and have been widely employed in various research works.
I still remember 1983, when I first participated in a course on Grey System Theory. The mimeographed teaching materials had a blue cover and were presented as a book. It was like finding a treasure: This fascinating book really inspired me as a young intellectual going through a period of confusion and lack of academic direction. It shone with pearls of wisdom and offered a beacon in the mist for a man trying to find his way in academic research. This book became the guiding light in my life journey, inspiring me to forge an indissoluble bond with Grey System Theory.
——Sifeng Liu

Professor Sifeng Liu, PhD., SM IEEE, is an Honorary Fellow of the WOSC, and Senior Fellow of the Marie Curie International Incoming Fellowships of the 7th Research Framework Programme of the European Commission. Sifeng Liu received PhD in systems engineering from Huazhong University of Science and Technology, China, in 1998. Dr. Liu is currently a distinguished professor at Nanjing University of Aeronautics and Astronautics, and a research professor at De Montfort University. He is the founding director of the Institute for Grey Systems Studies, the founding chair of TC of IEEE SMC on Grey Systems, and the founding president of the Grey Systems Society of China.
Professor Yingjie Yang is currently a full Professor of Computational Intelligence at the Centre for Computational Intelligence of De Montfort University, Leicester, UK. He received his BSc (Hons.), MSc and PhD degrees in engineering from Northeastern University, Shenyang, China, in 1987, 1990, and 1994, respectively. He was awarded his PhD degree in computer science at Loughborough University, Loughborough, UK, in 2008. Before joining De Montfort University in 2002, Dr. Yang had worked at Beijing Jiaotong University, Nottingham Trent University and Loughborough University in connection with various research projects.
Professor Jeffrey Forrest earned his educational degrees in pure mathematics. His PhD degree was granted in 1988 by Auburn University, Alabama; and he did one year of post-doctoral research in statistics at Carnegie Mellon University, Pittsburgh, from 1990 to 1991. Dr. Forrest is currently a specially appointed professor of economics, finance, and systems science at Nanjing University of Aeronautics and Astronautics, a specially appointed professor of mathematics and systems science at National University of Defense Technology, China, and a tenured professor of mathematics at Slippery Rock University of Pennsylvania. Dr. Forrest is a founder and the current president of the International Institute for General Systems Studies (IIGSS), a non-profit organization registered in PA in the mid-1990s.