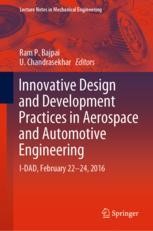 Innovative Design and Development Practices in Aerospace and Automotive Engineering

The book presents the best articles presented by researchers, academicians and industrial experts in the International Conference on “Innovative Design and Development Practices in Aerospace and Automotive Engineering (I-DAD 2016)”. The book discusses new concept designs, analysis and manufacturing technologies, where more swing is for improved performance through specific and/or multifunctional linguistic design aspects to downsize the system, improve weight to strength ratio, fuel efficiency, better operational capability at room and elevated temperatures, reduced wear and tear, NVH aspects while balancing the challenges of beyond Euro IV/Barat Stage IV emission norms, Greenhouse effects and recyclable materials. The innovative methods discussed in the book will serve as a reference material for educational and research organizations, as well as industry, to take up challenging projects of mutual interest.

Dr. Ram P. Bajpai, Ph.D. (IIT-Delhi), D.Sc. (Hokkaido University, Japan) is presently the Chancellor of Vel Tech Dr.RR & Dr.SR Technical University, Chennai. He has also been the Director General of MM Group of Institution, MM University, Mullana and Vice-Chancellor of MM University Solan till November 30, 2011. At the time, he was also holding charge of three universities as Vice-Chancellor, namely (1) Kurukshetra University, Kurukshetra; (2) Guru Jambheshwar University of Science and Technology, Hisar and (3) Deen Bandhu Chhotu Ram University of Science and Technology, Murthal simultaneously. Before joining GJU, Hisar, Dr. Bajpai was Director/Distinguished Scientist/Scientist at Central Scientific Instrument Organization, Chandigarh, one of the pioneering Research laboratories under CSIR, Government of India, New Delhi. He has excellent knowledge of Japanese and German languages, having a large number of publications in national and international journals of repute and a good number of patents. Dr. Bajpai has guided a large number of Ph.D. and M.S./M.Tech/B.Tech students in their thesis work for the award of degrees in various areas of electronics/microelectronics, materials science, nanoelectronics, optoelectronics, etc. Dr. Bajpai was UNDP Project Co-ordinator/ Director for the Microelectronics Instrumentation Development programme started in 1984 at CSIO, Chandigarh. He has filed and registered a large number of patents. Dr. Ram P. Bajpai has been Scientist/Visiting Professor in several universities at Japan, Germany, Switzerland, France, and USA.

Dr. U. Chandrasekhar is the Pro Vice Chancellor of Vel Tech Dr.RR & Dr.SR Technical University, Chennai. Previously, he was Director of Engineering Staff College of India (ESCI), an autonomous organ of The Institution of Engineers (India). Before taking charge as Director—ESCI, he was an Additional Director at a Ministry of Defence R&D organisation called Gas Turbine Research Establishment. For the past 26 years, he has been involved in design, analysis, prototyping, rapid manufacturing, and testing of aero gas turbine engines. He set up the first-ever rapid prototyping laboratory in the country. For his research efforts, he received commendation medal from the Scientific Advisor to the Defence Minister. He received a B.E. in Mechanical Engineering from NIT, Suratkal, M.Tech in Design Stream from IIT, Madras and Ph.D. from VTU. For his academic excellence at IIT-Madras, he received an award from former President of India Dr. A. P. J. Abdul Kalam. He was trained in Germany, UK, and Belgium in RP and sensor technologies. He is currently leading a critical technology development project of high-temperature thin film sensors in collaboration with NRC, Canada. He currently serves in the council of the Institution of Engineers and National Design and Research Forum. He was also chosen to represent India in the Young Leaders Convention of World Federation of Engineering Organisations at Geneva. He has been invited by several national and international professional bodies as the keynote speaker on advanced prototyping and sensor technologies.