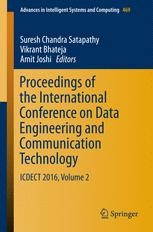 Proceedings of the International Conference on Data Engineering and Communication Technology

This two-volume book contains research work presented at the First International Conference on Data Engineering and Communication Technology (ICDECT) held during March 10–11, 2016 at Lavasa, Pune, Maharashtra, India. The book discusses recent research technologies and applications in the field of Computer Science, Electrical and Electronics Engineering. The aim of the Proceedings is to provide cutting-edge developments taking place in the field data engineering and communication technologies which will assist the researchers and practitioners from both academia as well as industry to advance their field of study.

Dr. Suresh Chandra Satapathy is currently working as Professor and Head, Department of Computer Science and Engineering at Anil Neerukonda Institute of Technology and Sciences (ANITS), Andhra Pradesh, India. He obtained his Ph.D. in Computer Science and Engineering from JNTU Hyderabad and M.Tech. in CSE from NIT, Rourkela, Odisha, India. He has 26 years of teaching experience. His research interests are data mining, machine intelligence and swarm intelligence. He has acted as program chair of many international conferences and edited 6 volumes of proceedings from Springer LNCS and AISC series. He is currently guiding 8 scholars for Ph.D. Dr. Satapathy is also a Senior Member of IEEE.

Mr. Amit Joshi has an experience of around 6 years in academic and industry in prestigious organizations of Rajasthan and Gujarat. Currently, he is working as an Assistant Professor in Department of Information Technology at Sabar Institute in Gujarat. He is an active member of ACM, CSI, AMIE, IEEE, IACSIT-Singapore, IDES, ACEEE, NPA and many other professional societies. Currently, he is Honorary Secretary of CSI Udaipur Chapter and Honorary Secretary for ACM Udaipur Chapter. He has presented and published more than 40 papers in National and International Journals/Conferences of IEEE, Springer, and ACM. He has also edited three books on diversified subjects including Advances in Open Source Mobile Technologies, ICT for Integrated Rural Development and ICT for Competitive Strategies. He has also organized more than 25 National and International Conferences and Workshops including International Conference ETNCC 2011 at Udaipur through IEEE, International Conference ICTCS 2014 at Udaipur through ACM, International Conference ICT4SD 2015 by Springer. He has also served on Organising and Program Committee of more than 50 Conferences/Seminars/Workshops throughout the World and presented 6 invited talks in various conferences. For his contribution towards the society, The Institution of Engineers (India), ULC, has given him Appreciation award on the celebration of Engineers, 2014 and by SIG-WNs Computer Society of India on ACCE , 2012.

Prof. Vikrant Bhateja is Associate Professor, Department of Electronics & Communication Engineering, Shri Ramswaroop Memorial Group of Professional Colleges (SRMGPC), Lucknow and also the Head (Academics & Quality Control) in the same college. His area of research include digital image and video processing, computer vision, medical imaging, machine learning, pattern analysis and recognition, neural networks, soft computing and bio-inspired computing techniques. He has more than 90 quality publications in various international journals and conference proceedings. Prof. Bhateja has been on TPC and chaired various sessions from the above domain in international conferences of IEEE and Springer. He has been the track chair and served in the core-technical/editorial teams for international conferences: FICTA 2014, CSI 2014 and INDIA 2015 under Springer-ASIC Series and INDIACom-2015, ICACCI-2015 under IEEE. He is associate editor in International Journal of Convergence Computing (IJConvC) and also serving in the editorial board of International Journal of Image Mining (IJIM) under Inderscience Publishers. At present he is guest editors for two special issues floated in International Journal of Rough Sets and Data Analysis (IJRSDA) and International Journal of System Dynamics Applications (IJSDA) under IGI Global publications.