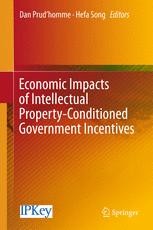 This book provides new insights into the economic impacts, strategic objectives and legal structures of an emerging branch of government incentives conditioned on meeting intellectual property-related requirements. Despite becoming more common in recent years, such incentives – ranging from patent fee subsidies and patent box tax deductions to inventor remuneration schemes – are still under-researched. A diverse range of analytical methods, including econometric analyses, case studies and comparative legal analysis, are used to study these incentives in countries in Europe and China. Scholars, policymakers and practitioners can benefit from the conceptual and practical insights as well as policy recommendations provided.

Alan Garcia is Leader of the KPMG China Centre of Excellence for R&D Incentives, Asia Pacific Regional R&D Leader at KPMG, and a R&D Tax Partner at KPMG. Alan has 18 years of R&D consulting experience with the Big 4. He assists companies to understand and access R&D incentive programs around Asia, including in China, Singapore, Australia, Malaysia, Vietnam, among other countries. Alan specializes in providing tailored knowledge transfer workshops and extensive analyses and processing of engineering and financial data – including understanding IP location issues, cross-charge/reimbursement across jurisdictions and associated financial risk. Among other services, he helps companies access appropriate funding opportunities, particularly for innovation, including commercialization of new technologies and/or projects that deliver environmental benefits. Alan holds a Bachelor of Laws; Bachelor of Arts; and is an Affiliate of the Institute of Chartered Accountants.
Cheryl Xiaoning Long is a Cheung Kong Scholar Professor and a member of China’s Review Group for the State Council’s Academic Degree Committee. Dr. Long obtained her PhD in Economics from Washington University in St. Louis in 2001 and taught at Colgate University between 2001 and 2011. In 2011, Professor Long joined the Wang Yanan Institute for Studies in Economics (WISE) and the School of Economics at Xiamen University, where she became the Chair of the Department of Economics in 2013. Professor Long’s main research interests are in law and economics, economic analysis of institutions, and economic development. Her work has been published in international journals including the Journal of Law and Economics, Journal of Public Economics, Journal of International Economics, Journal of Comparative Economics, Economic Development and Cultural Change, World Development, and others, as well as  top Chinese journals such as the Economic Research Journal and Management World. She is also a co-author of the book Foreign Direct Investment in China: Winners and Losers, published by World Scientific.
Liu Yun is a Professor at the School of Management and Economics and Director of the Research Center for Scientific Evaluation and Innovation Management at the Beijing Institute of Technology (BIT) in China. Since 2012, he served as the UNESCO Chair in South-South Cooperation for Science and Technology to Address the Climate Change. He is also the Chief Professor of Applied Economics at BIT. Dr. Liu has served as a consultant for Ministry of Science and Technology of China, National Natural Science Foundation of China, the State of Intellectual Property Office of China, Ministry of Commerce of China, Ministry of Education of China, and served on the directorate of the Chinese Association for Science of Science and Science Policy, and on the Scientometrics Indicators Committee of the Chinese Academy of Sciences.
Yafeng Zhang is a Researcher at the Institute of Policy and Management of the Chinese Academy of Sciences. He focuses on the fields of intellectual property management, and intellectual property and economics. He has participated in several research projects commissioned by the State Intellectual Property Office of China and Beijing Intellectual Property Office, and published several papers.
Liu Haibo is a Professor at the Institute of Policy and Management of Chinese Academy of Sciences focusing on management of intellectual property, technology transfer and the policy process. He has published three books and has carried out over 30 research projects related to these fields. He advises the State Intellectual Property Office of China, Intellectual Property Office of the Beijing Municipal Government, Science and Technology Committee of the Beijing Municipal Government and several companies. He is also an active lecturer on IP management and technology transfer. Dr. Haibo Liu received his PhD degree from a joint government educational program between China and Japan in 1997. Afterwards, he conducted post-doctorate research at the Chinese Academy of Social Sciences during 1997-1998, served as a STA Fellow research project in National Science and Technology Policy Institute of Japan (NISTEP) during 1999-2000, and was a Visiting Fellow at the Korea Institute for International Economy Policy (KIEP) during 2002-2003.