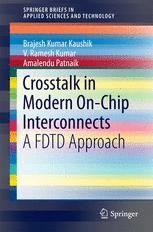 The book provides accurate FDTD models for on-chip interconnects, covering most recent advancements in materials and design. Furthermore, depending on the geometry and physical configurations, different electrical equivalent models for CNT and GNR based interconnects are presented. Based on the electrical equivalent models the performance comparison among the Cu, CNT and GNR-based interconnects are also discussed in the book. The proposed models are validated with the HSPICE simulations.

Brajesh Kumar Kaushik received the B.E. degree in Electronics and Communication Engineering from the D.C.R. University of Science and Technology (formerly C. R. State College of Engineering), Murthal, Haryana, in 1994, the M.Tech degree in Engineering Systems from Dayalbagh Educational Institute, Agra, India, in 1997, and the PhD degree under AICTE-QIP scheme from the Indian Institute of Technology Roorkee, Roorkee, India, in 2007. He served at Vinytics Peripherals Pvt. Ltd., Delhi from 1997 to 1998 as the Research and Development Engineer for microprocessor-, microcontroller-, and DSP processor-based systems.

He joined the department of Electronics and Communication Engineering, G.B. Pant Engineering College, Pauri Garhwal, Uttarakhand, India as a Lecturer in July, 1998, where later he served as an Assistant Professor from May 2005 to May 2006 and an Associate Professor from May 2006 to December 2009. He is currently serving as Associate Professor in the department of Electronics and Communication Engineering, Indian Institute of Technology Roorkee. His research interests include high-speed interconnects, low-power VLSI design, carbon nanotube-based designs, organic thin-film transistor design and modeling, and spintronics-based devices and circuits. He has published extensively in several national and international journals and conferences of repute. Dr. Kaushik is a reviewer of many international journals belonging to various publication houses such as IEEE, IET, Elsevier, Springer, Emerald, Taylor and Francis, etc. He has also delivered many keynote addresses in reputed international and national conferences. He holds the position of Editor and Editor-in-Chief of various journals in the field of VLSI and Microelectronics. Dr. Kaushik is Editor-in-Chief of International Journal of VLSI Design and Communication System (VLSICS), AIRCC Publishing Corporation. He also holds the position of Editor of Microelectronics Journal (MEJ), Elsevier Inc.; Journal of Engineering, Design and Technology (JEDT), Emerald Group Publishing Limited; and Journal of Electrical and Electronics Engineering Research (JEEER), Academic Journals. He is a Senior Member of IEEE and has received many awards and recognitions from the International Biographical Center, Cambridge, U.K. His name has been listed in Marquis Who’s Who in Science and Engineering and Marquis Who’s Who in the World.

Vobulapuram Ramesh Kumar received the B.Tech degree in Electronics and Communication Engineering from Bapatla Engineering College, Andhra Pradesh, in 2007, and the M.Tech degree from National Institute of Technology Hamirpur, in 2010. He is currently working towards the PhD degree from Indian Institute of Technology Roorkee, India. His current research interests include time domain numerical methods to approach fast transients characterization techniques, modeling of VLSI on-chip interconnects, carbon based nano interconnects and through silicon vias.

Amalendu Patnaik received his PhD in Electronics from Berhampur University in 2003. He is currently serving as Associate Professor in the department of Electronics and Communication Engineering, Indian Institute of Technology Roorkee. He served as a Lecturer in National Institute of Science and Technology, Berhampur, India. During 2004-05, he has been to University of New Mexico, Albuquerque, USA as a Visiting Scientist. He has published more than 50 papers in journal and conferences, co-authored one book on Engineering Electromagnetics, and one book chapter on Neural Network for Antennas in Modern Antenna Handbook from Wiley. Besides this, he has presented his research work as short courses/tutorials in many national and international conferences. His current research interests include array signal processing, application of soft-computing techniques in Electromagnetics, CAD for patch antennas, EMI and EMC. He was awarded the IETE Sir J. C. Bose Award in 1998 and BOYSCAST Fellowship in 2004-05 from Department of Science and Technology, Government of India. Dr. Patnaik is a life member of Indian Society for Technical Education (ISTE), Senior Member of IEEE and IEEE AP-S Region 10 Distinguished Speaker.