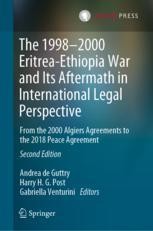 From the 2000 Algiers Agreements to the 2018 Peace Agreement

This book centres on the war that raged between Eritrea and Ethiopia from 1998 to 2000, a war that caused great loss of life and tremendous devastation. It analyses the war in great detail from an international legal perspective: the nature and the state of the boundary conflict preceding the actual armed conflict, the military actions themselves, the role of the UN peace-keeping mission, the responsibility for the multitude of explosive remnants of the war left behind. Ample attention is paid to the decisions of the Eritrea-Ethiopia Claims Commission and the Eritrea-Ethiopia Boundary Commission.

This study is not limited to the war and the period immediately following it, it also examines its more extended aftermath prolonging the analysis as far as the more recent improvement in the relations between Eritrea and Ethiopia, away from a situation of ‘no war, no peace’ that prevailed after the armed conflict ended. The analysis of the war and its aftermath is not only in terms of international legal issues, it has been placed in a wider than strictly legal perspective.

The book is a valuable work for academics and practitioners in international law, human rights and humanitarian law in particular, for political scientists, diplomats, civil servants, historians, and all those others seriously interested in the Horn of Africa.