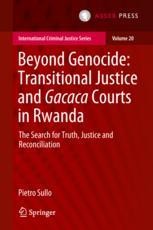 Beyond Genocide: Transitional Justice and Gacaca Courts in Rwanda

The Search for Truth, Justice and Reconciliation

Combining both legal and empirical research, this book explores the statutory aspects and practice of Gacaca Courts (inkiko gacaca), the centrepiece of Rwanda's post-genocide transitional justice system, assessing their contribution to truth, justice and reconciliation. The volume expands the knowledge regarding these courts, assessing not only their performance in terms of formal justice and compliance with human rights standards but also their actual modus operandi.
Scholars and practitioners have progressively challenged the idea that genocide should be addressed exclusively through 'westernised' criminal law, arguing that the uniqueness of each genocidal setting requires specific context-sensitive solutions. Rwanda's experience with Gacaca Courts has emerged as a valuable opportunity for testing this approach, offering never previously tried homegrown solutions to the violence experienced in 1994 and beyond. Due to the unprecedented number of individuals brought to trial, the absence of lawyers, the participative nature, and the presence of lay judges directly elected by the Rwandan population, Gacaca Courts have attracted the attention of researchers from different disciplines and triggered dichotomous reactions and appraisals.
The tensions existing within the literature are addressed, anchoring the assessment of Gacaca in a comprehensive legal analysis in conjunction with field research. Through the direct observation of Gacaca trials, and by holding interviews and informal talks with survivors, perpetrators, ordinary Rwandans, academics and the staff of NGOs, a purely legalistic perspective is overcome, offering instead an innovative bottom-up approach to meta-legal concepts such as justice, fairness, truth and reconciliation. Outlining their strengths and shortcomings, this book highlights what aspects of Gacaca Courts can be useful in other post-genocide contexts and provides crucial lessons learnt in the realm of transitional justice.
The primary audience this book is aimed at consists of researchers working in the areas of international criminal law, transitional justice, genocide, restorative justice, African studies, human rights and criminology, while practitioners, students and others with a professional interest in the topical matters that are addressed may also find the issues raised relevant to their practice or field of study.
Pietro Sullo teaches public international law and international diplomatic law at the Brussels School of International Studies of the University of Kent in Brussels. He is particularly interested in international human rights law, transitional justice, international criminal law, constitutional transitions and refugee law. After earning his Ph.D. at the Sant'Anna School of Advanced Studies in Pisa, Dr. Sullo worked at the Max-Planck-Institute for Comparative Public Law and International Law in Heidelberg as a senior researcher and as a coordinator of the International Doctoral Research School on Retaliation, Mediation and Punishment. He was also Director of the European Master's Programme in Human Rights and Democratization (E.MA) in Venice from 2013 to 2015 and lastly he has worked for international NGOs and as a legal consultant for the Libya Constitution Drafting Assembly on human rights and transitional justice.