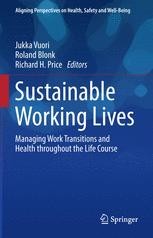 Managing Work Transitions and Health throughout the Life Course

The purpose of this volume is to describe the impact of the increased demand for flexibility on employees and its impact on their individual work life trajectories and health. The volume offers concrete examples of interventions aimed to find innovative ways of sustainable work careers for today's workers. We focus on the school to work transition, job insecurity, job loss and re-employment and retirement. The interventions described offer strategies for implementing support in employment contracts, increasing preparedness of individual employees with public education programs or developing work arrangements and support systems in work organizations.

Dr. Jukka Vuori is a Research Professor at the Finnish Institute of Occupational Health. His main interests are the sources and consequences of occupational stressors and coping during the major transitional phases of work life course, such as the school to work transition, job loss and re-employment and the retirement transition. Recently, as depression and burnout are major causes of early retirement due to disability, he has increasingly worked on topics of career management and job retention. Vuori's research group has been involved in prevention research, large field experiments (RCT), implementation and country-wide dissemination of group interventions into service systems for enhancing coping during these difficult occupational transition phases. His research group received first prize in the intervention study competition at the Work, Stress and Health 2008 in Washington D.C. Professor Vuori has published extensively scientific articles, monographs and book chapters within the research area of work and organizational psychology. He has published various intervention method manuals and workbooks for wider dissemination in basic and vocational schools, employment service organizations, work organizations and enterprises. He has served in many scientific expert duties for the European Union, WHO and the Finnish government and has been scientific advisor to various organizations in a number of countries in Europe, Australia and the Americas. He has chaired and been member in organizing committees of international congresses. He is the chair of the scientific committee "Unemployment, Job Insecurity and Health" of the International Commission of Occupational Health (ICOH).

Prof dr. Roland WB Blonk is Principal Scientist at TNO, one of the largest research centres for applied research in Europe. Further he is special professor at the Faculty of Social Sciences at the University of Utrecht. His main interest is work as a means of recovery. Applied to work related psychological complaints, his research resulted in state of the art guidelines for the treatment of burnout and depression with a focus on integrated work resumption for occupational physicians, insurance physicians and clinical psychologists. More recently his work focussed on the sustainable employability of the unemployed and low skilled workers. He developed diagnostic instruments and short term interventions that has been implemented on a national scale. Currently, in cooperation with the Dutch Ministry of Social Affairs, he is building regional solution focussed research programs that integrate the perspectives of the individual unemployed or low skilled worker, the employer, social welfare centres and governance. Roland Blonk has published a number of high impact scientific articles in the field of work and organizational psychology. He has served in many scientific advisory boards of companies and organisations, such as the Health Council, the Dutch Organisation for Scientific Research and Rotterdam Committee on Inclusive Economy. He is the secretary of the scientific committee "Unemployment, Job Insecurity and Health" of the International Commission of Occupational Health (ICOH).

Richard H. Price is Stanley E. Seashore Collegiate Professor of Psychology and Organizational Studies, Research Professor at the Institute for Social Research Emeritus. As Director of the Michigan Prevention Research Center at the Institute for Social Research, he and his colleagues conduct surveys and field experiments on organizational innovations aimed at improving the conditions of working life. The Center has been supported by the National Institutes of Health, the Carnegie Corporation of New York, the Joyce Foundation and the California Wellness Foundation.

Price has served on the Board of Trustees of the William T. Grant Foundation, and as an advisor to the Institute of Medicine, the National Institutes of Health, the Carnegie Corporation and a number of foundations. He has also been an advisor to government agencies and corporations in a number of countries in Europe and Asia as well as in the United States.

“The volume promises to be a valuable resource for students in need of a general introduction to current labour-market transformations, and provides an extensive literature review of various aspects of working life. Most chapters commence with a presentation of the main concepts and provide sufficient background references and literature. … it also functions as a valuable gateway for policymakers and organizations towards evidence-based interventions, with a focus on sustainable employment relations and healthy workers.” (Josephine Foubert, Work, employment and society, Vol. 31 (4), 2017)