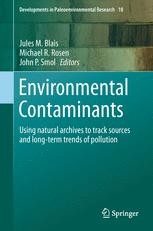 The human footprint on the global environment now touches every corner of the world. This book explores the myriad ways that environmental archives can be used to study the distribution and long-term trajectories of chemical contaminants. The volume first focuses on reviews that examine the integrity of the historic record, including factors related to hydrology, post-depositional diffusion, and mixing processes. This is followed by a series of chapters dealing with the diverse archives and methodologies available for long-term studies of environmental pollution, such as the use of sediments, ice cores, sclerochronology, and museum specimens.

Jules M. Blais, PhD is Professor of Biology and Environmental Toxicology at the University of Ottawa. He has published over 120 scientific articles on environmental chemistry and toxicology dealing especially with the behavior and fate of environmental contaminants and their impacts on lakes and northern communities. He is currently leading several projects on the effects of warming temperatures and resource extraction on freshwaters in Canada’s north, and is also working closely with federal regulators to investigate risks to northern populations by exposure to environmental contaminants from northern traditional diets and contaminated soils. He was recently named Environmental Scientist of the Year by the Royal Canadian Geographical Society (2008), and is co-recipient of the 2013 Brockhouse Canada Prize for outstanding contributions to interdisciplinary research, awarded by the Natural Sciences and Engineering Research Council of Canada. He is Associate Editor of Environmental Reviews, and serves on the editorial board of other journals. He founded and co-directs the Laboratory for the Analysis of Natural and Synthetic Environmental Toxicants, a major laboratory for the analysis of organic and metallic contaminants at the University of Ottawa. He is currently President of the Society of Canadian Limnologists, which is committed to the advancement of aquatic science and water issues in Canada.

Michael R. Rosen, PhD is Water Quality Specialist for the Western United States within the Water Science Field Team of the U.S. Geological Survey. He has been a research scientist with the U.S. Geological Survey since 2001. Before this, he was the Groundwater Quality Programme Leader at the Institute of Geological and Nuclear Sciences (now known as GNS Science), New Zealand, a research scientist at CSIRO, Australia, the Limnological Research Center, University of Minnesota, and Curtin University of Technology, Western Australia. He has published more than 175 journal articles and reports on topics ranging from limnogeology and limnology of lakes, groundwater and lake pollution, geothermal water chemical evolution and sinter formation, and tufa formation. He has also edited 3 books on groundwater in New Zealand, limnogeology of playas, and the ecosystem and limnology of Lake Mead. He has been an associate editor for the journals Ground Water and Sedimentology and currently is the editor of the Journal of the Nevada Water Resources Association and serves on the Board of Directors. He was elected as a fellow of the Geological Society of America in 2010.

John P. Smol, OC, PhD, FRSC is professor of biology (cross-appointed with the School of Environmental Studies) at Queen’s University (Kingston, Ontario), where he also holds the Canada Research Chair in Environmental Change. He founded and co-directs the Paleoecological Environmental Assessment and Research Lab (PEARL), a group of ~30 students and other scientists dedicated to the study of long-term global environmental change, and especially as it relates to lake ecosystems. He has authored ~500 journal publications and chapters since 1980, as well as completed 20 books. He was the founding Editor of the international Journal of Paleolimnology (1987-2007) and is the current Editor of the journal Environmental Reviews. Since 1990, he has been awarded over 45 research and teaching awards and fellowships, including the 2004 NSERC Herzberg Gold Medal as Canada’s top scientist or engineer. Recently, he was named an Officer of the Order of Canada, the country’s highest civilian honour. He is currently Chair of the International Paleolimnology Association (IPA).