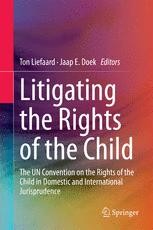 Litigating the Rights of the Child

This book examines the impact of the UN Convention on the Rights of the Child (CRC) on national and international jurisprudence, since its adoption in 1989. It offers state of the art knowledge on the functions, challenges and limitations of the CRC in domestic, regional and international children’s rights litigation. Litigating the Rights of the Child provides insight in the role of the CRC in domestic jurisprudence in ten countries from different parts of the world, with civil law, common law and Islamic law systems. In addition, it offers analyses of the jurisprudence of regional courts, in Europe and the Americas, and of human rights treaty bodies, including the Human Rights Committee, Committee on the Elimination of Discrimination against Women and the African Committee of Experts on the Rights and Welfare of the Child. This book presents a global and comparative picture on the use of the CRC in litigation and identifies emerging trends. This book serves as an important source of reference and inspiration for academics, students, legal professionals, including judges and lawyers, and (inter)national organisations working in the area of children’s rights.

Professor Dr Jaap E. Doek is an Emeritus Professor in Family and Juvenile Law at the VU University of Amsterdam and an extra-ordinary Professor in Children’s Rights at the Anton de Kom University of Suriname. He is the special legal advisor of ECPAT and is a member of the board of various international NGO’s, e.g. the African Child Policy Forum and Child Helpline International. He regularly serves as a consultant for UNICEF country offices. He was a member of the UN Committee on the Rights of the Child  from 1999 until 2007 and the chairperson of that committee from 2001 until 2007. He was Dean of the Law Faculty at the VU University of Amsterdam from 1988 to 1992. He has been a juvenile court judge in the District Courts of Alkmaar and The Hague (1978‑1985) and a deputy justice in the Court of Appeal of Amsterdam (2005-2012). He wrote or edited books and contributed to many books. Examples of books are: The Rights of the Child in International Law. Rights of the Child in a Nutshell and in Content: all about children’s rights. Bern: Stampfli Publishers 2012 (together with Nevena Vuckovic-Sahovic and Jean Zermatten); Child Poverty: African and International Perspectives. Antwerp/Oxford/Portland: Intersentia 2009 (together with A.K. Shiva Kumar, David Mugawe and Shimelis Tsegaye). Examples of contributions to books: ‘The Child’s Right to Freedom from Violence. The UN Convention on the Rights of the Child and UN CRC General Comment 13’ (together with Kim Svevo), in: Jon Conte (ed.), Child Abuse and Neglect Worldwide. Volume 1 Understanding, Defining and Measuring Child Maltreatment, Santa Barbara, Denver, Oxford: Praeger 2014; and ‘The CRC: Dynamics and Directions of Monitoring its Implementation’, in: Antonella Invernizzi and Jane Williams (eds), The Human Rights of Children from Vision to Implementation, Farnham/Burlington: Ashgate Publishers 2011.

Professor Dr Ton Liefaard holds the UNICEF Chair in Children’s Rights at Leiden University, Leiden Law School. He teaches children’s rights, child law and juvenile justice and has published widely on the UN Convention on the Rights of the Child and its meaning for children at the national level. Some of his key publications are: Deprivation of Liberty of Children in Light of International Human Rights Law and Standards (Intersentia 2008); ‘Juveniles in transition from juvenile justice to adult criminal justice’ (in: R. Loeber et al. (eds.). Persisters and Desisters in Crime from Adolescence into Adulthood: Explanation, Prevention and Punishment. Ashgate 2012); ‘Child Soldiers: Towards A Rights Based Imagery’ (in: C. Brants et al. (eds.). Transitional Justice. Images and Memories. Ashgate 2013); and ‘Juveniles’ Right to Counsel during Police Interrogations. An Interdisciplinary Analysis of a Youth Specific Approach, with a Particular Focus on the Netherlands’, Erasmus Law Review 2014 (with Y. van den Brink). He supervises PhD research on various children’s rights issues and regularly advises governments and international organisations (UN, Council of Europe, European Union, INGO’s), on issues related to children’s rights, juvenile justice, child friendly justice, child protection and alternative care, and violence against children. Ton Liefaard is furthermore a deputy juvenile judge at the District Court of Amsterdam and a member of the State Commission advising the Dutch Government on changing parental relationships and the position of children.