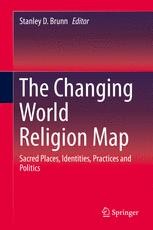 This extensive work explores the changing world of religions, faiths and practices. It discusses a broad range of issues and phenomena that are related to religion, including nature, ethics, secularization, gender and identity. Broadening the context, it studies the interrelation between religion and other fields, including education, business, economics and law. The book presents a vast array of examples to illustrate the changes that have taken place and have led to a new world map of religions.

Beginning with an introduction of the concept of the “changing world religion map”, the book first focuses on nature, ethics and the environment. It examines humankind’s eternal search for the sacred, and discusses the emergence of “green” religion as a theme that cuts across many faiths. Next, the book turns to the theme of the pilgrimage, illustrated by many examples from all parts of the world. In its discussion of the interrelation between religion and education, it looks at the role of missionary movements. It explains the relationship between religion, business, economics and law by means of a discussion of legal and moral frameworks, and the financial and business issues of religious organizations. The next part of the book explores the many “new faces” that are part of the religious landscape and culture of the Global North (Europe, Russia, Australia and New Zealand, the U.S. and Canada) and the Global South (Latin America, Africa and Asia). It does so by looking at specific population movements, diasporas, and the impact of globalization. The volume next turns to secularization as both a phenomenon occurring in the Global religious North, and as an emerging and distinguishing feature in the metropolitan, cosmopolitan and gateway cities and regions in the Global South. The final part of the book explores the changing world of religion in regards to gender and identity issues, the political/religious nexus, and the new worlds associated with the virtual technologies and visual media.

Stan Brunn labels himself a cosmopolitan Middle Westener after being raised in small towns and rural areas in a half-dozen states. He taught previously at the University of Florida and Michigan State University. He joined the University of Kentucky department in 1980 as chair and served in that capacity from 1980-88. He was appointed by the Governor as State Geographer from 1988-1989. His teaching and research interests include political, social and urban geography, the geographies of information and communication, time-space geographies and innovative cartographies. He has offered seminars on technological hazards, cyberspace, humane geographies, peace and reconciliation.

Stan’s research includes a number of authored, edited, and co-edited books and numerous articles which have appeared in geography and interdisciplinary journals. His most recent books are about Wal-Mart, E-commerce, geography and technology, 9-11, the fifth edition of Cities of the World, an Atlas of the 2008 Elections, an Atlas of Central Eurasia, and a three volume edited work on Engineering Earth: The Impacts of Megaengineering Projects, which is based on an international and interdisciplinary conference he co-organized in 2008. Recent articles and chapters, many with friends around the country and world, have dealt with the global financial crisis, immobility in rural Appalachia, religion/music interfaces, stamps and state identity, sparsely settled areas, classifying world cities, cognitive mapping of South African students, and North Dakota’s oil boom economies. His current research includes editing a multivolume book on The Changing World Religion Map, which will be published by Springer 2013; it is international in authors, interdisciplinary and also interfaith. Other projects include a co-edited volume on Mapping Across Academia, which has chapters by scholars in the sciences and humanities who use maps and a visually oriented world regional text.

He has taught for short periods in Australia and more than a dozen European and Central Asian countries, including Finland, Sweden, Ireland, Switzerland, Australia, Slovenia, The Netherlands, Bosnia, Kosovo, Iceland, Belgium, South Africa, Kazakhstan, Kyrgyzstan and China. In 2007 he was a Fulbright Lecturer at Semey State University in Semipalatinsk, Kazakhstan and in fall 2009 he was Visiting Professor at the National University of Ireland in Maynooth. He spent his 2010-11 sabbatical year in Ghent, Belgium; Cape Town, South Africa, and Reykjavik, Iceland. He also has been a US election observer in Kazakhstan and Tajikistan.

During the past four decades he has made many presentations at dozens of national and international conferences. He was elected University of Kentucky Distinguished Professor in the College of Arts and Sciences in 1989-90. He has been active in the Association of American Geographers, including editor of both The Professional Geographer and the Annals, AAG. He received AAG Honors in 1994, NCGE Mentor Award in 2004 and in 2006 the Lifetime Achievement Award from SEDAAG (Southeast Division, AAG); also he has served on a number of IGU, NCGE and AAG committees, including co-chair of the AAG Centennial Coordinating Committee. During the past two decades he has worked with educators in Kentucky to improve the quality and content of geography instruction in the state’s schools. Among the many highlights of his professional career was his appearance on NBC’s Today Show in 1971 to discuss his proposed political reorganization of the United States.

“Brunn’s work has made a major contribution to the geography of religion and to religious studies in general. The themes addressed in the volumes provide fodder for thought in areas of transcendence, globalization, deterritorialization, and contextualization, as well as offering windows of insight into newly emerging areas of gender challenges, personal preference identity in private, religious, and public space.” (Darrel L. McDonald, The AAG Review of Books, Vol. 6 (2), April, 2018)