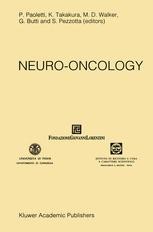 This volume contains the proceedings of the latest in a series of international symposia on advances in neuro-oncology, held September 26-29, 1990, in San Remo, Italy and sponsored by the University of Pavia, I.R.C.C.S. Policlinico San Matteo (Pavia, Italy) and the Giovanni Lorenzini Medical Foundation (Milan-Houston). It drew papers from six continents of the world, was attended by over 500 investigators, and demonstrated the extraordinary vitality, depth and breadth of research which characterizes modem neuro-oncology. Over the course of the last decade, there has been a remarkable shift in research carried out in the heterogeneous field of neuro-oncology, which appears to be away from clinical descriptive studies, and toward more basic and fundamental investigation of the pathology, immunohis­ tochemistry, biochemical and cellular subsets of brain tumors. Besides the traditional fields of neurology, neurosurgery, neuropathology, and radiation therapy, there has been an increased interest and involvement by investigators in the fields of medical oncology, neuroradiology, immunology, and many areas of fundamental neurobiology. It has become evident that interest has also been exhibited in a broader spectrum of tumors than just the malignant glial series, and studies in meningioma, craniopharyngioma, neurinomas, and the pituitary tumors were reported. Several sessions were devoted to the special problems of pediatric brain tumors.