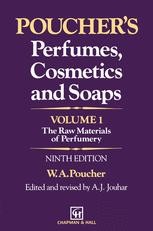 The Raw Materials of Perfumery

This classic work by Poucher, first published in 1923, was last produced in three volumes titled, respectively The Raw Materials of Perfumery (seventh edition, 1974), The Production, Manufacture and Application of Perfumes (eighth edition, 1974) and Modern Cosmetics (eighth edition, 1974). Its popularity is well demonstrated by there having been three reprints of these editions in 1976, 1979 and 1984, res pecti vel y . The history of events can be traced by reference to the prefaces to earlier editions and those interested should study these with care since they give a fascinating insight into developments in the subject fields covered by Poucher's Perfumes, Cosmetics and Soaps over the years. It is not proposed to provide a resume here. In this Volume I, the current edition attempts to provide data about raw materials in a more formalized way than before, so that not only the history of some compounds can be checked, but also so that useful reference information can be obtained. It is particularly relevant to do this, since it is not always easy to be certain of nomenclature. Moreover, as we move towards 'ingredient labelling' (a trend not welcomed by some), a high level of uniformity will be needed. Whether this will come from adoption of CTFA terminology, use of CAS numbers or some other system is not clear. Where possible, such data have been included so that readers may identify materials more readily. Where given, CAS numbers are located in the top right-hand corner of each entry.

`This book is rightly regarded as the bible of the perfumery industry flourishing as an indispensible guide to the constitution and manufacture of perfumes, cosmetics and soaps.'
Chimie Flash
`Poucher has been a standard reference since it was first published in 1923. It is indeed welcome to have an updated version.'
Chemical Monographs Review