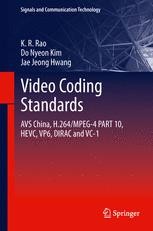 The requirements for multimedia (especially video and audio) communications increase rapidly in the last two decades in broad areas such as television, entertainment, interactive services, telecommunications, conference, medicine, security, business, traffic, defense and banking. Video and audio coding standards play most important roles in multimedia communications. In order to meet these requirements, series of video and audio coding standards have been developed such as MPEG-2, MPEG-4, MPEG-21 for audio and video by ISO/IEC, H.26x for video and G.72x for audio by ITU-T, Video Coder 1 (VC-1) for video by the Society of Motion Picture and Television Engineers (SMPTE) and RealVideo (RV) 9 for video by Real Networks.

AVS China is the abbreviation for Audio Video Coding Standard of China. This new standard includes four main technical areas, which are systems, video, audio and digital copyright management (DRM), and some supporting documents such as consistency verification. The second part of the standard known as AVS1-P2 (Video - Jizhun) was approved as the national standard of China in 2006, and several final drafts of the standard have been completed, including AVS1-P1 (System - Broadcast), AVS1-P2 (Video - Zengqiang), AVS1-P3 (Audio - Double track), AVS1-P3 (Audio - 5.1), AVS1-P7 (Mobile Video), AVS-S-P2 (Video) and AVS-S-P3 (Audio). AVS China provides a technical solution for many applications such as digital broadcasting (SDTV and HDTV), high-density storage media, Internet streaming media, and will be used in the domestic IPTV, satellite and possibly the cable TV market. Comparing with other coding standards such as H.264 AVC, the advantages of AVS video standard include similar performance, lower complexity, lower implementation cost and licensing fees. This standard has attracted great deal of attention from industries related to television, multimedia communications and even chip manufacturing from around the world. Also many well known companies have joined the AVS Group to be Full Members or Observing Members. The 163 members of AVS Group include Texas Instruments (TI) Co., Agilent Technologies Co. Ltd., Envivio Inc., NDS, Philips Research East Asia, Aisino Corporation, LG, Alcatel Shanghai Bell Co. Ltd., Nokia (China) Investment (NCIC) Co. Ltd., Sony (China) Ltd., and Toshiba (China) Co. Ltd. as well as some high level universities in China. Thus there is a pressing need from the instructors, students, and engineers for a book dealing with the topic of AVS China and its performance comparisons with similar standards such as H.264, VC-1 and RV-9.

Prof. K. R. Rao received the Ph. D. degree in electrical engineering from The University of New Mexico, Albuquerque in 1966. Since 1966, he has been with the University of Texas at Arlington where he is currently a professor of electrical engineering. He, along with two other researchers, introduced the Discrete Cosine Transform in 1975 which has since become very popular in digital signal processing. He is the co-author of the books "Orthogonal Transforms for Digital Signal Processing" (Springer-Verlag, 1975), "Fast Transforms: Analyses and Applications" (Academic Press, 1982), "Discrete Cosine Transform-Algorithms, Advantages, Applications" (Academic Press, 1990). He has edited a benchmark volume, "Discrete Transforms and Their Applications" (Van Nostrand Reinhold, 1985). He has coedited a benchmark volume, "Teleconferencing" (Van Nostrand Reinhold, 1985). He is co-author of the books, "Techniques and standards for Image/Video/Audio Coding" (Prentice Hall, 1996), "Packet video communications over ATM networks"(Prentice Hall, 2000) and "Multimedia communication Systems" (Prentice Hall, 2002). He is coeditor of the handbooks, "The transform and data compression handbook" (CRC Press, 2001), and "Digital video image quality and perceptual coding" (Marcel Dekker, 2004). He is co-author of the book, "Fast Fourier Transform and Its Applications" (Springer, 2009). Some of his books have been translated into Japanese, Chinese, Korean and Russian. He has conducted workshops/tutorials on video/audio coding/standards worldwide. He has published extensively in refereed journals and has been a consultant to industry, research institutes and academia. He is a Fellow of the IEEE.

Dr. Do Nyeon Kim received the B.E. degree from Kyungpook National University, Daegu, Korea, in 1985 and the M.S. and Ph.D. degrees, both in electrical engineering, both from Yonsei University, Seoul, Korea, in 1988 and 2004, respectively. From 1989 to 1994, he was a senior researcher at ETRI, Daejeon, Korea. He was a lecturer at Yonsei University in 2004. From 2005, he is a visiting professor in the Department of Electrical Engineering, the University of Texas at Arlington. He is a recipient of IT scholarship for 2005 and 2006 for post-doctoral program from the Institute for Information Technology Advancement and the Ministry of Information and Communication, Republic of Korea. He is co-author of the book, "Fast Fourier Transform and Its Applications" (Springer, 2010).

Prof. J.J. Hwang received the B.S., M.S., and Ph.D. degrees in electronic engineering from the Chonbuk National University in 1983, 1986, and 1992, respectively. He is currently full-professor at the Kunsan National University, Korea, and adjunct professor of RMIT University, Sydney,  Australia. His research interests are digital image/video coding & processing, information theory, object segmentation and tracking, and 2D/3D visual quality assessment and evaluation. He is the co-author of Techniques and standards for image, video and audio coding (Prentice Hall, 1996) and Fast Fourier transform – Algorithms and applications (Springer, 2010).
Show all