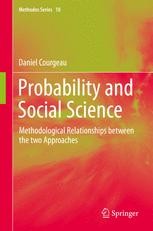 Methodological Relationships between the two Approaches

This work examines in depth the methodological relationships that probability and statistics have maintained with the social sciences from their emergence. It covers both the history of thought and current methods.

First it examines in detail the history of the different paradigms and axioms for probability, from their emergence in the seventeenth century up to the most recent developments of the three major concepts: objective, subjective and logicist probability. It shows the statistical inference they permit, different applications to social sciences and the main problems they encounter.

On the other side, from social sciences—particularly population sciences—to probability, it shows the different uses they made of probabilistic concepts during their history, from the seventeenth century, according to their paradigms: cross-sectional, longitudinal, hierarchical, contextual and multilevel approaches. While the ties may have seemed loose at times, they have more often been very close: some advances in probability were driven by the search for answers to questions raised by the social sciences; conversely, the latter have made progress thanks to advances in probability.

This dual approach sheds new light on the historical development of the social sciences and probability, and on the enduring relevance of their links. It permits also to solve a number of methodological problems encountered all along their history.

The purpose of this book is to examine historical connections between probability and social science, demography in particular. The Author, Daniel Courgeau, Professor Emeritus at INED, Paris, is a distinguished French demographer, renowned for his pioneering methodological work on event history analysis and multi-level modelling in population studies, and for keen interest in probability issues. That such a volume was published in the year commemorating the 350th anniversary of both John Graunt’s Bills of Mortality, which marks the beginning of modern social sciences, as well as of Logic, or The Art of Thinking by Antoine Arnauld and Pierre Nicole, whom the Author sees as precursors of applied probability and statistical decision analysis, is a fine coincidence indeed.

The book is structured into two parts, the first one dealing with the history of probability and its impact on social sciences, and the second one, conversely, with how advances in social sciences influenced the developments of probability theory. These two parts are preceded by a General Introduction to the whole volume, which outlines the history of probability and social sciences, in particular since the 17th century, and provides the reader with a roadmap through the entire book. Each of the two parts has a separate brief introduction and a succinct conclusion; finally, the whole volume ends with a General Conclusion, which is slightly longer and broader in scope. Importantly for readers in a hurry, who nevertheless want to have a flavour of the contents, all the introductions and conclusions together are almost standalone, and enable quick orientation in the main messages.

… In summary, this book is a very welcome compendium on the history and perspectives of probability and social sciences, brought together in one volume, which can be fully recommended especially for academics and doctoral students of quantitative social sciences.