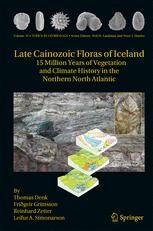 Being the only place in the northern North Atlantic yielding late Cainozoic terrestrial sediments rich in plant fossils, Iceland provides a unique archive for vegetation and climate development in this region. This book includes the complete plant fossil record from Iceland spanning the past 15 million years. Eleven sedimentary rock formations containing over 320 plant taxa are described. For each flora, palaeoecology and floristic affinities within the Northern Hemisphere are established. The exceptional fossil record allows a deeper understanding of the role of the “North Atlantic Land Bridge” for intercontinental plant migration and of the Gulf Stream-North Atlantic Current system for regional climatic evolution.

’Iceland sits as a “fossil trap” on one of the most interesting biogeographic exchange routes on the planet - the North Atlantic. The fossil floras of Iceland document both local vegetational response to global climate change, and more importantly, help to document the nature of biotic migration across the North Atlantic in the last 15 million years. In this state-of-the-art volume, the authors place sequential floras in their paleogeographic, paleoclimatic and geologic context, and extract a detailed history of biotic response to the dynamics of physical change.’

’This beautifully-illustrated monograph of the macro- and microfloras from the late Cenozoic of Iceland is a worthy successor to Oswald Heer’s “Flora fossilis arctica”. Its broad scope makes it a must for all scientists interested in climatic change and palaeobiogeography in the North Atlantic region. It will remain a classic for years to come.’

Thomas Denk (*1969) is a palaeobotanist at the Swedish Museum of Natural History, Stockholm. His research focuses on diversification patterns and evolution of Northern Hemispheric plant groups, both modern and fossil. In addition, he is interested in the vegetation and climate history of the Northern Hemisphere during the Cainozoic, in particular the differentiation of modern temperate, Mediterranean, and eastern continental biota in western Eurasia.

Friðgeir Grímsson (*1976) currently holds a Senior Post-doc position at the Department of Palaeontology, University of Vienna, Austria. He received his Ph. D. in geology/palaeontology from the University of Iceland, Reykjavík. The focus of his research has been the origin, evolution, and biogeographic affinities of Icelandic Cainozoic floras. Currently, he is studying the impact of global cooling following the Mid-Miocene climatic optimum on European palynofloras.

Reinhard Zetter (*1955) is Associate Professor at the Department of Palaeontology, University of Vienna, Austria, where he also received his Ph. D. in Palaentology/Palynology. He established new methods for studying dispersed fossil pollen (single grain method) using light and scanning electron microscopy and is a world leading expert in palaeopalynology.

Leifur A. Símonarson (*1941) is Professor of Palaeontology at the Institute of Earth Sciences, University of Iceland. The focus of his research has been on the Cainozoic marine invertebrate fauna of Iceland and Greenland, and migration patterns and evolution of selected molluskan groups in the Northern Hemisphere.