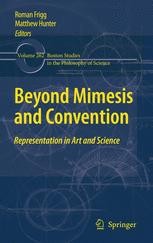 Beyond Mimesis and Convention

Representation in Art and Science

Representation is a concern crucial to the sciences and the arts alike. Scientists devote substantial time to devising and exploring representations of all kinds. From photographs and computer-generated images to diagrams, charts, and graphs; from scale models to abstract theories, representations are ubiquitous in, and central to, science. Likewise, after spending much of the twentieth century in proverbial exile as abstraction and Formalist aesthetics reigned supreme, representation has returned with a vengeance to contemporary visual art. Representational photography, video and ever-evolving forms of new media now figure prominently in the globalized art world, while this "return of the real" has re-energized problems of representation in the traditional media of painting and sculpture. If it ever really left, representation in the arts is certainly back.

Central as they are to science and art, these representational concerns have been perceived as different in kind and as objects of separate intellectual traditions. Scientific modeling and theorizing have been topics of heated debate in twentieth century philosophy of science in the analytic tradition, while representation of the real and ideal has never moved far from the core humanist concerns of historians of Western art. Yet, both of these traditions have recently arrived at a similar impasse. Thinking about representation has polarized into oppositions between mimesis and convention. Advocates of mimesis understand some notion of mimicry (or similarity, resemblance or imitation) as the core of representation: something represents something else if, and only if, the former mimics the latter in some relevant way. Such mimetic views stand in stark contrast to conventionalist accounts of representation, which see voluntary and arbitrary stipulation as the core of representation. Occasional exceptions only serve to prove the rule that mimesis and convention govern current thinking about representation in both analytic philosophy of science and studies of visual art.

This conjunction can hardly be dismissed as a matter of mere coincidence. In fact, researchers in philosophy of science and the history of art have increasingly found themselves trespassing into the domain of the other community, pilfering ideas and approaches to representation. Cognizant of the limitations of the accounts of representation available within the field, philosophers of science have begun to look outward toward the rich traditions of thinking about representation in the visual and literary arts. Simultaneously, scholars in art history and affiliated fields like visual studies have come to see images generated in scientific contexts as not merely interesting illustrations derived from "high art", but as sophisticated visualization techniques that dynamically challenge our received conceptions of representation and aesthetics.

"Beyond Mimesis and Convention: Representation in Art and Science" is motivated by the conviction that we students of the sciences and arts are best served by confronting our mutual impasse and by recognizing the shared concerns that have necessitated our covert acts of kleptomania. Drawing leading contributors from the philosophy of science, the philosophy of literature, art history and visual studies, our volume takes its brief from our title. That is, these essays aim to put the evidence of science and of art to work in thinking about representation by offering third (or fourth, or fifth) ways beyond mimesis and convention. In so doing, our contributors explore a range of topics-fictionalism, exemplification, neuroaesthetics, approximate truth-that build upon and depart from ongoing conversations in philosophy of science and studies of visual art in ways that will be of interest to both interpretive communities. To put these contributions into context, the remainder of this introduction aims to survey how our communities have discretely arrived at a place wherein the perhaps-surprising collaboration between philosophy of science and art history has become not only salubrious, but a matter of necessity.

“The aim of the volume is explicitly stated as putting ››works of art and theories of science ›to work‹ in a shared enterprise of thinking representation beyond mimesis and convention‹‹ … . the collection take their inspiration from the theory of fiction and try to apply these inspirations to the study of scientific models. … the essays all make interesting and state-of-the-art contributions to their respective topics.” (Tobias Klauk, Journal of Literary Theory, August, 2011)

“The aim of the book is to see what might be achieved by bringing the two impasse-stricken subjects together. … The collection … succeeds in displaying a variety of ways in which aesthetics can be applied to problems of representation in the philosophy of science. … this book will be a valuable point of reference.” (Clive Cazeaux, British Journal of Aesthetics, Vol. 52 (2), April, 2012)

“The book … is a great example of interdisciplinary collaborative work, bringing together contributions by scholars of science and of art, around the topic of representation. … The result is a high-standard, remarkably edited book. … this rich and heterogeneous book clearly achieves the goal of showing the fruitfulness of an interdisciplinary approach to art and science … .” (Marion Vorms, Theoria, Vol. 75, 2012)