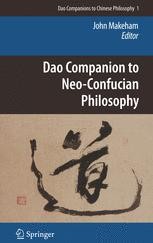 This Companion is the first volume to provide a comprehensive introduction, in accessible English, to the Neo-Confucian philosophical thought of representative Chinese thinkers from the eleventh to the eighteenth centuries. It brings together nineteen essays on a range of topics in Neo-Confucian philosophy, embracing natural and speculative philosophy through to virtue ethics and political philosophy. Written for undergraduate and postgraduate university students in philosophy and Chinese history courses, as well as academics, the Companion is distinguished by several features: It demonstrates the key role played by philosophical discourse in Neo-Confucian self-cultivation; it evidences the fundamental connections that were posited between morality in human society and its cosmological and ontological underpinnings; and it provides detailed insights into changing perspectives on key philosophical concepts and their relationship with one another.

John Makeham teaches in the China Centre at The Australian National University. He is a specialist in Chinese intellectual history with a particular interest in Confucian philosophy. In 2005 he was awarded the Joseph Levenson Book Prize for his monograph, Transmitters and Creators: Chinese Commentators and Commentaries on the Analects. He is a past President of the Australasian Society for Asian and Comparative Philosophy and is editor of the new monograph series, Modern Chinese Philosophy (Brill). Current research undertakings including editing a volume on the formation of Chinese philosophy as an academic discipline and also preparing an annotated translation of Xiong Shili's Xin Weishi lun (New Treatise on Cognition-only), a seminal text in twentieth-century Chinese philosophy.

“This is primarily a ‘philosophical’ companion to a philosophical tradition but it also has a great deal to offer to intellectual historians, comparativists, and anyone interested in Chinese and East Asian thought. … This mostly philosophical companion to Neo-Confucian philosophy is highly informative on moral philosophy and moral psychology intimately linked in Neo-Confucianism. … this book will be widely consulted by philosophically minded scholars of all kinds and not just by specialists in China and East Asia.” (Conrad Schirokauer, Journal of Chinese Studies, Vol. 54, January, 2012)

“John Makeham’s Dao Companion to Neo-Confucian Philosophy is an extremely important collection of scholarly essays that will have to be in the bibliography of anyone commenting on relevant portions of the Neo-Confucian cultural development. … Makeham’s introductory essay … is most likely the most important contribution to the volume. Makeham provides an historical vision of Neo-Confucianism … and a helpful interpretation of the contemporary approaches.” (Robert C. Neville, International Journal for Philosophy of Religion, Vol. 71, 2012)

“Editor John Makeham called upon specialists from several lands to prepare this book. … the Dao Companion to Neo-Confucianism is an academic milestone. Its contributions to the study of Chinese Neo-Confucianism will continue to inform, intrigue, and stimulate scholarly and philosophic reflection for years to come. … It will also be a useful guide for advanced students and interested general readers. I recommend this book highly for every scholar of Chinese philosophy in general and Neo-Confucian thought in particular.” (Kirill O. Thompson, Journal of Chinese Religions, Vol. 39, 2011)