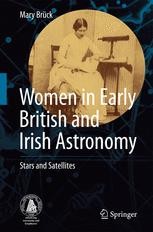 Careers in astronomy for women (as in other sciences) were a rarity in Britain and Ireland until well into the twentieth century. The book investigates the place of women in astronomy before that era, recounted in the form of biographies of about 25 women born between 1650 and 1900 who in varying capacities contributed to its progress during the eighteenth, nineteenth and early twentieth centuries. There are some famous names among them whose biographies have been written before now, there are others who have received less than their due recognition while many more occupied inconspicuous and sometimes thankless places as assistants to male family members. All deserve to be remembered as interesting individuals in an earlier opportunity-poor age. Placed in roughly chronological order, their lives constitute a sample thread in the story of female entry into the male world of science.

The book is aimed at astronomers, amateur astronomers, historians of science, and promoters of women in science, but being written in non-technical language it is intended to be of interest also to educated readers generally.

Mrs Mary Brück is a retired senior lecturer in astronomy at the University ofEdinburgh, now an Honorary Fellow in the School of Science and Engineering at the University of Edinburgh. Her present interest is in the history of astronomy, especially the contributions of nineteenth century British and Irish women. She has done a considerable amount of original research on astronomers (mainly women), including biographical entries in the OxfordDNB (2004), the Dictionary ofNineteenthCentwy BrEt&z Scientists (Thommes, Bristol 2004), Larousse Dictionary ofScientists (Larousse, Edinburgh 1994), the Biographical Encyclopaedia ofAstronomers (Springer 2006), the Biographical Dictionary ofScott&i Women (Edinburgh University Press 2006), and the Royal Irish Academy Biographical Dictionary (forthcoming). She is also the author ofAgnes Mary Clerke and the Rise ofAsirophysics (Cambridge University Press 2002) and coauthor (with H.A.Bruck) of The Perpatetic Asfronomer, the Lfe ofCharles Piazzi Smyth (Huger: Bristol 1988).

"This book is a tour de force bringing together the stories of Irish and British women of astronomy from the past 300 years covering all facets of their work … . I can recommend it for a fascinating read about the social and scientific structure of this time in Irish and British astronomical history. … The author draws a distinction between the astronomy practiced in the universities and schools of the European continent … . The book is extremely well referenced … ." (Sethanne Howard, Astronomy Education Review, June, 2009)

“This wonderful book is a fine legacy bequeathed us by Mary Bruck … . points are all well drawn out in Mary’s book and one can only hope that women in astronomy today will derive inspiration from what their intellectual ancestors – and there are many more discussed than the handful mentioned above – contributed. The volume itself is nicely produced with a number of monochrome images … and there are copious notes and references for the student of history who wishes to pursue the subject further.” (David Stickland, The Observatory, Vol. 130 (1215), April, 2010) “This is the first real account of women that were either astronomers in their own right or assistants that became astronomers during the eighteenth, nineteenth and early twentieth centuries. … the book will appeal to both academia and the general reader. … I am impressed by the wealth of new material included as well as the excellent referencing and bibliography.” (Ian Welland, Astronomy Now, August, 2010)

“Brück devoted the last decades of her life to astronomical history, and this excellent book is an example of her work. Anyone interested in the history of astronomy will find herein details of the scientific, social, and cultural lives of women and some men in an era before ‘Big Science.’ … Summing Up: Highly recommended. Upper-division undergraduates through professionals; general audiences.” (M. Dickinson, Choice, Vol. 47 (11), August, 2010)

“The late Mary Brück takes a unique approach to her topic. … book is accessible to the general interested reader; when technical details are necessary she presents them clearly. … This book is a ‘must read’ for those seeking a comprehensive review of women in British astronomy. It is well written and should appeal to both scholarly and popular readers. Scholars will appreciate the notes at the end of each chapter that include primary material from both printed and archival sources … .” (Marilyn Bailey Ogilvie, Journal for the History of Astronomy, May, 2011)