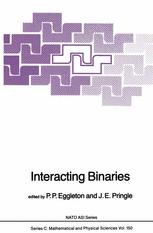 Peter P. Eggleton and James E. Pringle Institute of Astronomy Madingley Road Cambridge England The 1970's can be described, in retrospect, as the "Decade of the Close Binary". Exciting observations with new technology, combined with classical work, both observational and theoretical, convinced the astronomical world that binary interaction of various kinds is not only interesting but common. Indeed, by 1975 almost anything unusual had a good chance of being interpreted as due to binary interaction. But astronomers are seldom overwhelmed by speculation, even their own, and solid observational work has confirmed or refuted such speculation, without regard to its plausibility. For instance, binarity has been found where it was perhaps least expected, in Barium stars, and refuted where it could most reasonably be expected, in Wolf-Rayets. Unfortunately, many other classes of potential binaries remain without the clearest evidence of binarity, for instance Be stars, symbiotics and blue stragglers. This Advanced Study Institute was held to commemorate John Whelan (1945-1981), whose scientific career, sadly cut short in its prime, did much to further the careful study, theoretical and observational, of close binaries, as well as to encourage the spirit of international friendship and collaboration. His own interests covered a greater field, but "Interacting Binaries" seemed a reasonable restriction. We publish here 15 review talks, which still do not cover the whole topic, although they range widely.