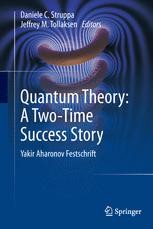 Yakir Aharonov is one of the leading figures in the foundations of quantum physics. His contributions range from the celebrated Aharonov-Bohm effect (1959), to the more recent theory of weak measurements (whose experimental confirmations were recently ranked as the two most important results of physics in 2011). This volume will contain 27 original articles, contributed by the most important names in quantum physics, in honor of Aharonov's 80-th birthday.