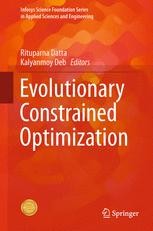 Rituparna Datta is a postdoctoral research fellow with the Robot Intelligence Technology (RIT) Laboratory at the Korea Advanced Institute of Science and Technology (KAIST). He earned his PhD in Mechanical Engineering at Indian Institute of Technology (IIT) Kanpur and thereafter worked as a Project Scientist in the Smart Materials, Structures, and Systems Lab at IIT Kanpur. His current research work involves investigation of Evolutionary Algorithms-based approaches to constrained optimization, applying multi-objective optimization in engineering design problems, memetic algorithms, derivative-free optimization, and robotics. He is a member of ACM, IEEE, and IEEE Computational Intelligence Society. He has been invited to deliver lectures in several institutes and universities across the globe, including at the Trinity College Dublin (TCD), Delft University of Technology (TUDELFT), University of Western Australia (UWA), University of Minho, Portugal, University of Nova de Lisboa, Portugal, University of Coimbra, Portugal, and IIT Kanpur, India. He is a regular reviewer of IEEE Transactions on Evolutionary Computation, Journal of Applied Soft Computing, Journal of Engineering Optimization, Journal of The Franklin Institute, and International Journal of Computer Systems in Science and Engineering, and was in the program committee of Genetic and Evolutionary Computation Conference (GECCO 2014), iNaCoMM2013, GECCO 2013, GECCO 2012, GECCO 2011, eighth international conference on Simulated Evolution And Learning (SEAL 2010), international conference on molecules to materials (ICMM-06), and some Indian conferences.  He has also chaired session in ACODS 2014 and UKIERI Workshop on Structural Health Monitoring 2012, GECCO 2011, IICAI 2011 to name a few. He was awarded an international travel grant (Young Scientist), from Department of Science and Technology, Govt. of India, in July 2011 and June 2012 and travel grants from Queensland University, Australia, June 2012, GECCO Student Travel Grant, ACM, New York.

Kalyanmoy Deb is Koenig Endowed Chair Professor at the Department of Electrical and Computer Engineering in Michigan State University (MSU), East Lansing, USA. He also holds a professor position at the Department of Computer Science and Engineering, and at the Department of Mechanical Engineering in MSU. Prof. Deb's main research interests are in genetic and evolutionary optimization algorithms and their application in optimization, modeling, and machine learning. He is largely known for his seminal research in developing and applying Evolutionary Multi-objective Optimization. Prior to coming to MSU, he was holding an endowed chair professor position at Indian Institute of Technology Kanpur, India, where he established KanGAL (http://www.iitk.ac.in/kangal) to promote research in genetic algorithms and multi-criterion optimization since 1997. His Computational Optimization and Innovation (COIN) Laboratory (http://www.egr.msu.edu/~kdeb) at Michigan State University continues to act in the same spirit. He has consulted with various industries and software companies in the past. Prof. Deb was awarded the prestigious `Infosys Prize' in 2012, `TWAS Prize' in Engineering Sciences in 2012, `CajAstur Mamdani Prize' in 2011, `JC Bose National Fellowship' in 2011, `Distinguished Alumni Award' from IIT Kharagpur in 2011, 'Edgeworth-Pareto' award in 2008, Shanti Swarup Bhatnagar Prize in Engineering Sciences in 2005, `Thomson Citation Laureate Award' from Thompson Reuters. Recently, he has been awarded a Honarary Doctorate from University of Jyvaskyla, Finland. His 2002 IEEE-TEC NSGA-II paper is judged as the Most Highly Cited paper and a Current Classic by Thomson Reuters having more than 4,200+ citations. He is a fellow of IEEE, ASME, Indian National Science Academy (INSA), Indian National Academy of Engineering (INAE), Indian Academy of Sciences (IASc), and International Society of Genetic and Evolutionary Computation (ISGEC). He has written two text books on optimization and more than 375 international journal and conference research papers with Google Scholar citations of 65,000+ with h-index of 85. He is in the editorial board on 20 major international journals. More information about his research can be found from http://www.egr.msu.edu/~kdeb.

“The book contains ten chapters, each one dealing with various aspects of the current state of the art in the field of evolutionary optimization algorithms applied to general constrained optimization problems. … It will be useful for practitioners dealing with hard constrained optimization problems, as well as researchers and graduate students in the computer science and engineering fields.” (Petrica Pop, Computing Reviews, October, 2015)