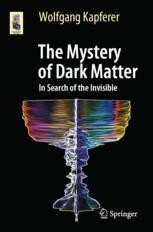 The Mystery of Dark Matter

In Search of the Invisible

Get ready to embark on the exciting search for dark matter—the invisible mass that dominates our universe. This popular science book explains why this mysterious dark matter has been incorporated into the standard model of the universe and how scientists are able to “observe” the invisible.

The book starts with the early indications of the existence of dark matter, including the strange cohesion of galaxy clusters, before moving on to modern observations like cosmic background radiation. Along the way, you will learn about the direct and indirect methods being used by researchers to track down dark matter and whatever is behind this strange phenomenon.

The Mystery of Dark Matter will appeal to general readers who wish to understand what scientists actually know about dark matter, along with the methods they use to help crack the mystery.

This book is a translation of the original German 1st edition Das Rätsel Dunkle Materie by Wolfgang Kapferer, published by Springer-Verlag GmbH Deutschland in 2018.The translation was done with the help of artificial intelligence (machine translation by the service DeepL.com). A subsequent human revision was done primarily in terms of content, so that the book will read stylistically differently from a conventional translation. Springer Nature works continuously to further the development of tools for the production of books and on the related technologies to support the authors.

Wolfgang Kapferer, born 1973, studied astronomy and physics at the University of Innsbruck. In his doctoral thesis and active research time he worked on theoretical models of the evolution of large-scale structures, so-called galaxy clusters. A central role was played by computer simulations and their comparison with observations. The main focus of his work was to better understand the gas dynamic processes involved.