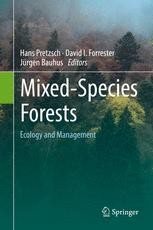 This textbook offers a detailed overview of the current state of knowledge concerning the ecology and management of compositionally and structurally diverse forests. It provides answers to central questions such as:

In addition, the book addresses experimental designs and analytical approaches to study mixed-species forests and provides extensive empirical information, general concepts, models, and management approaches for mixed-species forests. As such, it offers a valuable resource for students, scientists and educators, as well as professional forest planners, managers, and consultants.

Hans Pretzsch (*1957) received his Ph. D. in Forest Growth and Yield Science and Biometrics at Ludwig-Maximilians-Universität München and his Dr. h. c. at Czech University of Agriculture of Prag.  Dr. Pretzsch has been Professor of Forest Growth and Yield Science at Technische Universität München since 1994 and responsible for the network of long-term experimental plots in Bavaria which date back to 1860. For the past 20 years he focused on general rules of tree and stand growth, forest modelling, and diagnosis of forest growth disturbances. He currently teaches forestry and sustainable resource management to undergraduate and graduate students as well as professional foresters.

Jürgen Bauhus (*1964) is Professor of Silviculture at the Faculty of Environment and Natural Resources at Freiburg University, Germany. He studied forest sciences in Freiburg, Vienna, and Göttingen, received his PhD from Göttingen University and spent 2 years as a post-doc at the University of Québec at Montréal. From 1996 to 2003 he worked as lecturer and senior lecturer in silviculture and tree physiology at the Australian National University, where dynamics of mixed-species plantations and native forests were a focus of his research. In 2003, he took up the Chair of Silviculture at Freiburg University, where he developed a research program on structure and dynamics of forests, carbon and nutrient cycles, ecological interactions in forest ecosystems as well as the adaptation of forests to global change. At Freiburg University, Prof. Bauhus established an international MSc Program in Forest Sciences, the graduate school “Environment, Society and Global Change” and served as Dean of the Faculty of Forest and Environmental Sciences from 2011-2013. His efforts in teaching and student support were awarded in 2008 with the teaching prize of the University of Freiburg and the “Professor of the Year” award of the German-wide university magazine, UNICUM. Jürgen published several books and more than 150 peer-reviewed papers and book chapters. He is a member of the Scientific Advisory Board on Forest Policy at the German Federal Ministry of Food and Agriculture. For his scientific accomplishments he received in 2014 the IUFRO scientific achievement award as the first German forest scientist.

David Forrester (*1978) is a research scientist in the Stand dynamics and Silviculture group at the Swiss Federal Institute for Forest, Snow and Landscape Research WSL. He studied forest science at the Australian National University where he received a Bachelor of Science degree (2000) and PhD (2004). His PhD project focused on the growth dynamics of mixed species forests and how species interactions influence carbon and nutrient pools and fluxes. From 2005 to 2012 David was a post-doc at the Department of Forest and Ecosystem Science, University of Melbourne, Australia. There he studied the effects of various silvicultural treatments and species interaction on growth, log quality, water cycles and light absorption. During this time he won a Victoria Fellowship (2008) to travel through Chile, Argentina, Uruguay and Brazil to synthesize the range of mixed species systems used in plantations as well as the silviculture used to produce solid wood products. In 2009 he received a Humboldt Fellowship to examine the influence of site and climate on species interactions in the Black Forest of Germany. David worked as a research scientist at the Chair of Silviculture at Freiburg University, Germany, between 2012 and 2016, where he won a Heisenberg Fellowship. Since 2017, he has been managing the long-term growth and yield plot network at WSL. David has published about 80 peer-reviewed papers.

“Straightforward illustrations and infographics are an added advantage of the book, and the writing style needs special appreciation, let it be the abstracts or the take-home messages at the end of the chapters. This book must be recommended in the curriculum for forestry and natural resource management and is highly useful for students as well as researchers.” (S. Suresh Ramanan, Basic and Applied Ecology, Vol. 35, 2019)​