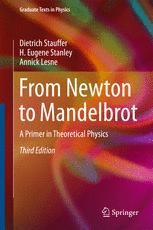 From Newton to Mandelbrot

A Primer in Theoretical Physics

This textbook takes the reader on a tour of the most important landmarks of theoretical physics: classical, quantum, and statistical mechanics, relativity, electrodynamics, as well as the most modern and exciting of all: elementary particles and the physics of fractals. The second edition has been supplemented with a new chapter devoted to concise though complete presentation of dynamical systems, bifurcations and chaos theory. The treatment is confined to the essentials of each area, presenting all the central concepts and equations at an accessible level. Chapters 1 to 4 contain the standard material of courses in theoretical physics and are supposed to accompany lectures at the university; thus they are rather condensed. They are supposed to fill one year of teaching. Chapters 5 and 6, in contrast, are written less condensed since this material may not be part of standard lectures and thus could be studied without the help of a university teacher. An appendix on elementary particles lies somewhere in between: It could be a summary of a much more detailed course, or studied without such a course. Illustrations and numerous problems round off this unusual textbook. It will ideally accompany the students all along their course in theoretical physics and prove indispensable in preparing and revising the exams. It is also suited as a reference for teachers or scientists from other disciplines who are interested in the topic.

CV Prof. Annick LESNE
Annick Lesne (54 years) is a senior researcher at CNRS (French national center of scientific research), working in the Theoretical Physics of Condensed Matter laboratory (LPTMC), at the University Pierre et Marie Curie in Paris, and in the Institute of Molecular Genetics in Montpellier.In the past years, she has been  assistant professor at this university (from 1990 to 2006)  co-director of the Paris Institute of Complex Systems (ISC-PIF, from 2003 to 2008), and visitor at the Institut des Hautes Etudes Scientifiques (IHES, Bures-sur-Yvette, from 2005 to 2012).Among her present responsibilities, she is a member of the editorial board of 'EPJ Nonlinear Biomedical Physics' (Springer) and the director of the series "Echelles" (Belin, 35 volumes). She has published 75 peer-reviewed articles, and  beyond the present book  'From Newton to Mandelbrot', she has   authored three monographs and coordinated four collective books, all published both in French and English.