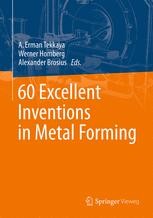 60 novel approaches in metal forming are presented and explained in detail. Contributions from acknowledged international scientists representing the state-of-art in metal forming open a general view on recent results and a clear view on demands for new research initiatives.

Prof. Dr.-Ing. Dr.-Ing. E.h. A. Erman Tekkaya
Since 2007, A. Erman Tekkaya is Professor at the TU Dortmund University and Head of the Institute of Forming Technology and Lightweight Construction (IUL). Since 2011 he is senior coordinator of the MMT degree program, the Master of Science in Manufacturing Technology. Since October 2014 he is also Dean of the Faculty of Mechanical Engineering. A. Erman Tekkaya studied mechanical engineering at the Department of Mechanical Engineering at the Middle East Technical University in Ankara. He finished his PhD in 1985, at the Institute for Metal Forming Technology at University of Stuttgart, with honors. In 1988, the Habilitation (Üniversite docenti) at the TC Üniversite-ler Arası Kurul in Ankara followed. From 1986 to 2005 he worked at the Middle East Technical University in Ankara. After his time as Assistant and Associate Professor he became Full Professor in 1993. From 2005 to 2009 A. Erman Tekkaya was Professor and Head of the Manufacturing Engineering Department at the ATILIM University in Ankara. Until September 2013 he was the founding director of the Center of Excellence on Metal Forming in Ankara.

His research interests are metal forming technologies as bulk metal forming, sheet metal forming, bending and high speed forming, as also the modeling of metal forming processes and material characterization. In recognition of his contributions in the field of metal forming he was awarded the honorary degree Doktor-Ingenieur Ehren halber (Dr.-Ing. E.h.) by the Faculty of Engineering of Friedrich-Alexander- University in Erlangen - Nürnberg in 2012. In October 2014 he was awarded the International Prize for Research & Development in Precision Forging of the Japanese Society of Technology of Plasticity for process innovation, process characterization and international Leadership.

A. Erman Tekkaya is member of numerous national and international committees and cherishes memberships to national and international scientific academies and associations. A. Erman Tekkaya is "Editor-in-Chief" of the Journal of Materials Processing Technology of Elsevier for 7 years. According to Scopus, his h-factor currently is 20 and the number of citations to his publications is 1600.

W. Homberg is a professor at the University of Paderborn since 2007 and managed the Chair of Forming and Machining Technology (LUF) in the Department of Mechanical Engineering. There he is chairman of the Commission “Strategy and Resources” and member of the Committee for Planning and Finance at the University of Paderborn. He studied mechanical engineering at the Technical University of Dortmund. After his completion of studies, he worked as a research co-worker at the Institute of Forming Technology and Lightweight Construction (IUL) in the field of sheet metal forming. In this field, he graduated with honors in the year 2000. Subsequently, he worked as a senior engineer at the IUL and was mainly responsible for the coordination of research.

W. Homberg assumes the function as reviewer in the context of national and international research funding and is member of the working group of forming technology (AGU) in Germany.

Prof. Dr.-Ing. Alexander Brosius
In July 2012 Alexander Brosius became a full Professor as head of the Chair of Forming and Machining Processes (FF) at the Technische Universität Dresden (TU Dresden). He has been a CIRP Research Affiliate since 2009 and is involved in project evaluations for the DFG as an expert reviewer.

Before beginning his studies of mechanical engineering at the University of Applied Sciences in Berlin in 1993 specializing in construction, Alexander Brosius has completed a three-year vocational training as industrial tool maker at Siemens AG in Berlin. In 1997 he became a research assistant at the Chair of Construction and Manufacturing at Brandenburg University of Technology in Cottbus before joining the Chair of Forming Technology at University of Dortmund in 1998 as part of the technical staff while completing his advanced degree specializing in production technology.

In 2002 Alexander Brosius became research assistant at the Institute of Forming Technology and Lightweight Construction (IUL) at the University of Dortmund where he received his doctorate (Dr.-Ing.) with honors in 2005 for his thesis on “A Method for the Determination of Strain-Rate-Dependent Flow Curves by Means of Electromagnetic Tube Forming an Iterative Finite-Element-Analysis”.

He continued his work in research at the IUL as a department manager for the group of high speed forming and joining and later as chief engineer for research. In 2011 he was awarded the title of Assistant Professor (Juniorprofessor) for “Modelling and Simulation in Forming Technology and Lightweight Construction” at the Technical University of Dortmund from where he received his call to TU Dresden in 2012.

His research interests are metal forming technologies, material characterization and simulation methodology with a special focus on hybrid processes and process chains for property oriented manufacturing.