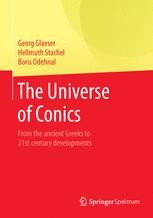 The Universe of Conics

From the ancient Greeks to 21st century developments

This text presents the classical theory of conics in a modern form. It includes many novel results that are not easily accessible elsewhere. The approach combines synthetic and analytic methods to derive projective, affine and metrical properties, covering both Euclidean and non-Euclidean geometries.

With more than two thousand years of history, conic sections play a fundamental role in numerous fields of mathematics and physics, with applications to mechanical engineering, architecture, astronomy, design and computer graphics.

This text will be invaluable to undergraduate mathematics students, those in adjacent fields of study, and anyone with an interest in classical geometry.

Augmented with more than three hundred fifty figures and photographs, this innovative text will enhance your understanding of projective geometry, linear algebra, mechanics, and differential geometry, with careful exposition and many illustrative exercises.

Coauthor of several books on mathematics and computational geometry and of more than 120 articles on geometry.

“The hundreds of meticulously crafted and beautifully rendered figures … form the most attractive component of the book. … ‘The book has been written for people who love geometry and it is mainly based on figures and synthetic conclusions rather than on pure analytic calculations. In many proofs, illustrations help to explain ideas and to support the argumentation, and in a few cases, the picture can display a theorem at a glance together with its proof.’” (Tushar Das, MAA Reviews, maa.org, March, 2017)

“The main purpose of the book under review is to present definitions, main properties and applications of conics from different complementary viewpoints. … It is written primarily for a general–undergraduate–public … . the figures deserve a special mention: on one hand they help to explain the proofs and on the other they show the beauty of geometry and the elegance of mathematics.” (Roberto Muñoz, Mathematical Reviews, January, 2017)

“‘The universe of conics’ covers the most important properties of conics in an attempt to preserve at least parts of the knowledge that was accumulated over the last two millenia. … ‘The universe of conics’ is a must read for all who still speak geometry as well as for those who would like to learn this ancient language.” (Franz Lemmermeyer, zbMATH 1354.51001, 2017)

“This book is an innovative, masterful presentation of conic sections in both Euclidean and non-Euclidean geometries. It is beautifully illustrated with more than 360 full-color figures and photographs. … The text will interest both beginning students and readers with a strong mathematical background. The book concludes with a list of 70 references. Summing Up: Recommended. Upper-division undergraduates through researchers and faculty; professionals and practitioners.” (D. P. Turner, Choice, Vol. 54 (3), November, 2016)