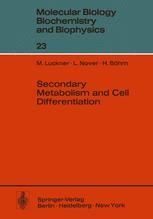 1. Secondary Metabolism and Differentiation In addition to the primary metabolic reactions, which are similar in all living beings (formation and breakdown of nucleic acids and proteins as well as of their precursors, of most carbohy­ drates, of some carboxylic acids, etc. ), a vast number of metab­ olic pathways lead to the formation of compounds peculiar to a few species or even to a single chemical race only. These reac­ tions, in accord with CZAPEK (1921) and PAECH (1950), are summed up under the term "secondary metabolism", and their products are called "secondary metabolites. " The wide variety of secondary products formed in nature includes such well-known groups as alkaloids, antibiotics, cardiac glyco­ sides, tannins, saponins, volatile oils, and others. A consider­ able number of them are of economic importance in therapeutics or technology. Although secondary products are produced by micro­ organisms, higher plants, and animals (cf. LUCKNER, 1972), most of the substances are found in the plant kingdom. The lack of mechanisms for true excretion in higher plants may result in this unequal distribution, the "waste products" of metabolism in plants instead being accumulated in the vacuoles, the cell walls, or in special excretory cells or spaces of the organism ("metabolic excretion," cf. FREY-WYSSLING, 1935, 1970; MOTHES, 1966a, b, 1972; LUCKNER et al. , 1976. Many secondary substances have, however, a direct biologic func­ tion. They can be regulatory effectors, e. g.