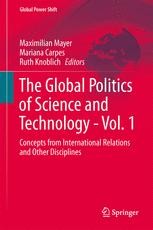 The Global Politics of Science and Technology - Vol. 1

Concepts from International Relations and Other Disciplines

This first volume summarizes various time-tested approaches for studying the global politics of science and technology from an IR perspective. It also provides empirical, theoretical, and conceptual interventions from geography, history, innovation studies, and science and technology studies that indicate ways to enhance and rearticulate IR approaches. In addition, several interviews advance possibilities of multi-disciplinary collaboration.

Maximilian Mayer is program co-chair of STAIR (Science, Technology, Arts and International Relations) a newly established section of the International Studies Association. He studied in Bochum and Shanghai and holds a master degree in East Asian politics from the Ruhr-University Bochum. He received scholarships from the German National Academic Foundation twice from 2004 to 2007 and from 2009 to 2010. He joined the CGS in October 2009 and has worked there as managing assistant (2009-2013). He leads the CGS research group on “rising knowledge powers” and presents regularly at international conferences. His research interests include the global politics/policy of science, innovation, and technology; Chinese foreign, and energy policy; global energy and environmental politics; International Relation theories.

Mariana Carpes is a junior research fellow and a Ph.D. candidate at the GIGA German Institute of Global and Area Studies where she is working on a historical comparative analysis of the nuclear strategies of Brazil, India, and South Africa. Her main areas of interest are history and theory of IR, nuclear politics, and foreign policy analysis. Recently Mariana has also started to work on strategic partnership between EU and Brazil. In 2012 and 2013 she held presentations on this topic at the European External Action Service (EEAS). She holds a Bachelor in History from the Universidade Federal Fluminense (Brazil) and a Master in International Relations from the Pontificia Universidade Catolica do Rio de Janeiro.

Ruth Knoblich is a research fellow at the Institute of Development Research and Development Policy (IEE), Ruhr-University Bochum and at the Institute of Political Science and Sociology, University of Bonn; she teaches courses in both institutes and at the South African – German Centre for Development Research, University of the Western Cape. She studied in Bonn and Madrid and holds a master’s degree in Political Science, History and Philosophy from the University of Bonn as well as two basic degrees in Medicine. Her research interests include innovation policies and innovation systems, emerging economies and South-South science and technology cooperation, global politics of intellectual property rights, science and technology in the international political economy, and national policy making in the context of globalisation and global governance.

Mayer, Carpes and Knoblich have produced a cutting-edge research agenda for analyzing science and technology in global politics. They develop the concept of “techno-politics” to navigate the spaces between social constructivists (ideas all the way down) and economic determinism. Until recently, most scholars of international politics have treated technology as an exogenous factor – something outside of, or apart from, politics. The “debate” over the role of technology is at once normative and intensely political. Whether one is analyzing climate change, robotic warfare, digital networks, surveillance, or cyber-security, debates can become frozen between conceptualizing technology as either a solution, or as the central problem.  Mayer and his co-editors demonstrate the utility of bringing technology back in and of conceptualizing technology as inherently political.

These volumes offer a variety of interdisciplinary middle-range theoretical approaches to explain the role of technology in politics. Examining both the interaction between technology and politics, and the co-production of technology and politics offers a constructive way forward for scholars and students to understand and explain important phenomena in global politics. The editors have assembled a superb team of experts in these volumes and have incorporated an impressive body of scholarly research. These volumes undoubtedly will inspire and help to guide future research on the vital and contested role of technology in global governance, regulation, competition, and security. This is a superb contribution.- Susan K. Sell, Professor of Political Science and International Affairs, George Washington University

How exciting it is to see two large, comprehensive, edited volumes on technology and world politics. For years a small number of IR scholars have worked hard to bring the "problem" of technology to the attention of the field. These volumes suggest this may finally happen. They also suggest there is now a critical mass of talented researchers working in the area to constitute a genuine subfield. But these volumes are much more than that. They do not simply create another sandbox for a few initiates to play in. They, individually and collectively, make the case for an truly interdisciplinary engagement with mainstream IR. There is much to admire and learn from here. The most successful volume yet on the new materiality in IR.- Geoffrey Herrera, Fletcher Jones Associate Professor of Political Studies, Pitzer College

These two volumes bring together science and technology studies with international relations. Together they provide in depth insights and examples of the many forms that this project can take. Curious outsiders and interested insiders alike will find the variety of ideas and their combination intriguing, inspiring and enticing. The volumes extend a warm invitation to engage further with a rapidly expanding area of research and contemporary politics.- Anna Leander, Professor with Special Responsibilities, Copenhagen Business School