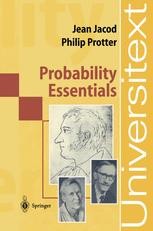 We present here a one-semester course on Probability Theory. We also treat measure theory and Lebesgue integration, concentrating on those aspects which are especially germane to the study of Probability Theory. The book is intended to fill a current need: there are mathematically sophisticated stu­ dents and researchers (especially in Engineering, Economics, and Statistics) who need a proper grounding in Probability in order to pursue their primary interests. Many Probability texts available today are celebrations of Prob­ ability Theory, containing treatments of fascinating topics to be sure, but nevertheless they make it difficult to construct a lean one semester course that covers (what we believe are) the essential topics. Chapters 1-23 provide such a course. We have indulged ourselves a bit by including Chapters 24-28 which are highly optional, but which may prove useful to Economists and Electrical Engineers. This book had its origins in a course the second author gave in Perugia, Italy, in 1997; he used the samizdat "notes" of the first author, long used for courses at the University of Paris VI, augmenting them as needed. The result has been further tested at courses given at Purdue University. We thank the indulgence and patience of the students both in Perugia and in West Lafayette. We also thank our editor Catriona Byrne, as weil as Nick Bingham for many superb suggestions, an anonymaus referee for the same, and Judy Mitchell for her extraordinary typing skills. Jean Jacod, Paris Philip Protter, West Lafayette Contents 1. Introduction . . . . . . . . . . . . . . . . . . . . . . . . . . . . . . . . 1 . . . . . . . . . . . . . .

JOURNAL OF THE AMERICAN STATISTICAL ASSOCIATION

"I like this book, and think that it would be fun to use it for its intended purpose…This book does a fine job for the stated purposes, and it can be highly recommended."

"The authors provide the shortest path through the twenty-eight chapter headings. The topis are treated in a mathematically and pedagogically digestible way. The writing is concise and crisp: the average chapter length is about eight pages. ... Numerous exercises add to the value of the text as a teaching tool. In conclusion, this is an excellent text for the intended audience."

"This introduction to probability theory can be used … for a one-semester course on probability theory … . It will also be useful for students and teachers in related areas such as finance theory (economics), electrical engineering, and operations research. The text covers the essentials in a directed and lean way with 28 short chapters. … The second edition contains some additions to the text and so the references and some parts are completely rewritten." (L’ Enseignement Mathematique, Vol. 50 (3-4), 2004)

"The first part of the book … provides a one-semester course on probability theory, including measure theory and Lebesgue integration, concentrating on those aspects which are especially germane to the study of probability theory. The second part … covers martingales, super- and submartingales, martingale convergence theorems, and the Radon-Nykodym Theorem, which might prove useful for students of economic and electrical engineering." (Zentralblatt für Didaktik der Mathematik, August, 2003)